From primitive to mechanical, the evolution of the bulldozer begins in the 1800s and is interjected with a contribution from the agricultural industry with crawler tractors. 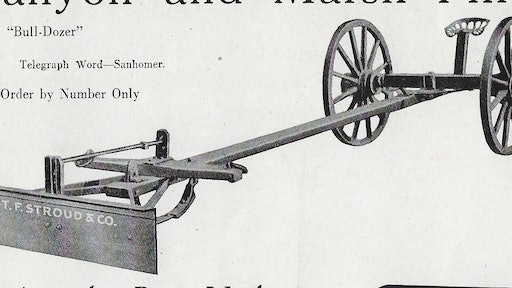 Ever since we started rearranging the surface of the earth, there has been a need to push piles of dirt and rock and, especially, to push it into holes or over the edge of a bank. It could certainly be done with hand tools, but only with great effort and much time. The difficulty arose with how to do it mechanically.

Its year of invention and the name of the inventor are lost to history, but in the mid- to late-1800s a device was developed to solve this problem. Details vary, but the general design consisted of a long beam with a perpendicular, vertical blade at one end and an axle and teamster’s seat at the other. With horses attached to both sides of the beam, it provided a handy means of using the original form of horsepower to push material in advance of the team. The earliest examples known to this author were built circa 1880, and these primitive “bulldozers” were produced as late as the early 1920s.

As crawler tractors were introduced into agriculture and logging in the late 1910s, it was only natural that these eminently practical machines should be adapted for construction. Not only were they far superior to stock for pulling wagons and scrapers; over time, their potential use with bulldozers emerged as well. Benjamin Holt reportedly tested a blade on the front of a steam tractor as early as 1902, and experimented with a blade on a crawler tractor in 1916.

The first successful use of a dozer blade on a crawler tractor is believed to have been an invention by LaPlant-Choate Manufacturing Company in 1920 for use at the City of South Milwaukee garbage dump. The blade could not be lifted or lowered; like the blade on the stock-powered dozers, it simply flipped up and dragged on the ground when backing up.

As the idea of a tractor-mounted blade evolved, so too did variations on the design. An adjustable angle dozer was developed for situations in which spoil had to be moved to the side; indeed, several manufacturers called angle dozers “trail builders” because of their suitability for cutting roads and trails along cross slopes. Other dozers were designed for specific applications such as land clearing, pushloading scrapers, mine reclamation, and gathering and pushing large volumes of bulk material. As hydraulics improved, multi-positional six-way dozers that could be angled and/or tilted came into widespread use.

Over the years, the crawler tractor came to be known by the name of its bulldozer attachment, and many models of crawler tractors are designed specifically for dozer service.

Flight1x is a first to market cloud-based solution for the DJI M300 that delivers drone mapping accuracy and inspection automation for mining and construction operations.
September 14, 2021

DEUTZ XChange remanufactured engines, as well as Tier 4 engines and hybrid models will be among the products on display.
DEUTZ Corporation
September 13, 2021

The use of alternative fuels significantly reduces the carbon footprint of DEUTZ’s combustion engines and raises the prospect of running engines on a carbon-neutral basis in the future.
DEUTZ Corporation
September 7, 2021
Follow Us