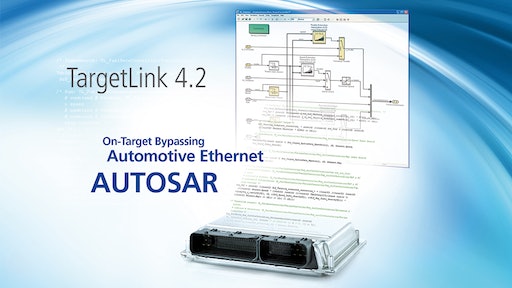 By supporting on-target bypassing, TargetLink 4.2 merges production software development and function development. If developers want to extend the software functionality of an existing production ECU, they can now perform function development directly on the ECU itself if it provides sufficient I/O and available resources. By using the code generator in combination with the dSPACE ECU Interface Software, developers now benefit from highly efficient TargetLink code as early as close-to-production prototyping. This enables them to identify the required resources early on, reduces project risks, and ensures a smooth transition to series production.

It is now also possible to generate enumeration types and variables (C enums) with TargetLink, which further increases the code’s readability and makes integrating existing code much easier. In addition, version 4.2 once more increases MISRA C compliance of the TargetLink code, including the current MISRA C:2012 Amendment 1. For modeling in Simulink/Stateflow, TargetLink now offers even more possibilities due to the use of Stateflow Superstep semantics, activity signals for different states, and easier bus handling. In order to simplify and automate the use of TargetLink in large, distributed teams, the production code generator can be connected to the dSPACE data management software SYNECT. A new version of the SYNECT Add-On for TargetLink will be available soon.