Seeking increased material handling, a double-vehicle solution was created placing two dozers next to one another with a shared, long dozer blade. 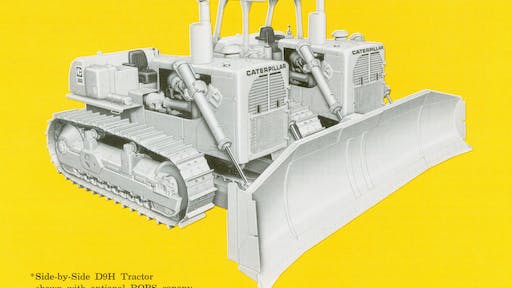 Caterpillar D9H crawler tractors in the SxS arrangement, with the standard 24-foot dozer. The Double Dude variant’s angle dozer was twice as long, and the tractors were offset 11 ft. to accommodate it.
Caterpillar, Inc. spec sheet AEHQ9181, February 1975, HCEA Archives

Strip mining, by its very nature, requires massive amounts of earthmoving. Not only must the mineral be uncovered, but the overburden must be replaced to reclaim the land. As with other large-scale earthmoving operations, efficiency, cost reduction and other issues were best addressed by machines designed for the task.

Buster Peterson combined two Cat D9Gs end-to-end to create a single pushloading tractor with twice the power, but for high-volume material handling with a crawler tractor, the issue wasn’t so much the horsepower as it was blade capacity. Various experiments were attempted – and failed – in creating a more powerful, higher-capacity dozer by combining two large crawler tractors onto one undercarriage. The Euclid TC-12, for all its power, was still only a single-width dozer and lacked the higher dozer capacity of its experimental predecessors. And while modified dozer designs such as the concave U- and semi-U dozers gave a single tractor increased blade capacity, there was still room for improvement.

In 1969, the same year that Caterpillar Inc. introduced the Dual D9G for pushloading, it also introduced the SxS D9G. The concept was similar to the Dual D9G, but instead of end-to-end these worked side-by-side (SxS). The two tractors were physically connected with ball and socket joints at the rear and at the two inside crawlers, and they pushed a 24-ft. wide modified U dozer. The ball-and-socket joints provided optimum traction under load and on rough ground. The operator was stationed on the left-hand unit, as seen from the rear, and operated both machines through a joystick and air over hydraulic controls, with the control lines on the rear tie bar. The two tractors could be separated for individual use as needed.

When the D11N was introduced in 1986, it had a substantial competitive advantage over the SxS and Dual D9s. Although the paired D9Gs had the same horsepower at 1,375 rpm that the D11N generated at 1,800 rpm, the D11N cranked it out of 8 cylinders versus 12 for the two D9s. That, combined with greatly improved engine control systems, gave the D11N a decided advantage in fuel consumption. Also, the D11N was a highly effective machine for ripping, a task unsuitable for the SxS D9s.

Russell & Sons Construction Company of Longview, TX, took the SxS idea to its ultimate form in 1976. They modified one of their two SxS D9H sets so that the right-hand tractor was offset 11 ft. behind the left-hand machine, and equipped it with an enormous 48 ft. 8 in. long, variably curved angle dozer fabricated by Balderson. The dozer alone weighed some 27,600 lbs. plus hardware. The curvature and angle of the blade was designed to move the most material possible to the side with minimal resistance, and working in passes up to 70 feet long it moved 14,210 cu. yd. of overburden in one hour in 1977. Named Double Dude, the massive machine has been retired for some years, and Russell & Sons has restored the blade as a unique billboard.

The Historical Construction Equipment Association (HCEA) is a 501(c)3 non-profit organization dedicated to preserving the history of the construction, dredging and surface mining equipment industries. With approximately 4,000 members in 25 countries, our activities include publication of a quarterly educational magazine, Equipment Echoes; operation of National Construction Equipment Museum and archives in Bowling Green, OH; and hosting an annual working exhibition of restored construction equipment.

Our 2017 show will be November 3-5 at the Ederville Train and Tractor Show, Carthage, North Carolina, USA.

Several heavy equipment and component manufacturers will showcase their latest products for the concrete and masonry construction industry at World of Concrete.
Sara Jensen
January 24, 2022

Hatz Components has been established as an independent unit to help drive further growth while a partnership with Sontheim Industrie Elektronik will create digital solutions for predictive engine maintenance.
Sara Jensen
January 20, 2022