Not all ideas pass the test of time

Some machine design ideas are undoubtedly outstanding on paper, but the resulting product doesn't always work out over time. 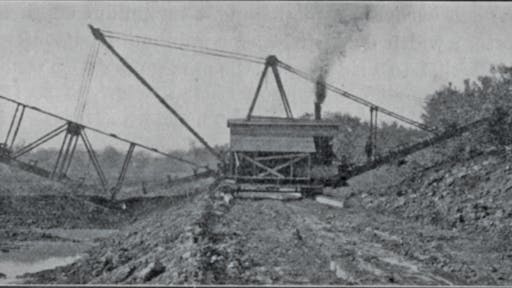 Typically, the Off-Highway Heroes section takes a look at earlier designs of current equipment. But, since our State of the Industry issue looks to the future with projections, trend analysis and technologies that are yet to exist, we thought it would be interesting to look at the forward-thinking designers of the past whose out-of-the-box ideas just didn't make it in the long run but were memorable nonetheless.

One example is the F. C. Austin Drainage Excavator Company Templet (that’s how they spelled it) Levee Builder (figure 1). Developed in 1900, the templet excavator dug ditches and canals in profile. The original templet excavators traveled on rails or crawlers and straddled the excavation. A digging frame was shaped to the cross section of the ditch to be excavated and lowered to contact the ground. A single bucket shuttled back and forth along the frame, digging from the ditch invert and bottom and dumping clear of the ditch by a trip mechanism. The digging frame was lowered with each pass, and when its base reached final grade it was raised clear, the machine advanced three feet, and the process started over again.

On the Templet Levee Builder, the digging frame was suspended off one side of the machine. The bucket, with a capacity of 1-1/3 to 2 yards, was drawn through the cut, across the machine’s direction of travel, and up to the opposite end of the frame, which was suspended over the centerline of the levee. It was dumped there and drawn back for another pass. The house was 22 feet long by 20 wide, and the machine traveled on flanged wheels atop 200 feet of 12 x 12 timbers. It required an operator, fireman, two-man track gang, a teamster and team of horses to move the timbers, and another man and team to haul fuel and supplies. It could excavate 100 cubic yards an hour in favorable conditions.

At first glance, this looks like a trencher, but it isn’t. Along with its well-established line of concrete equipment, Koehring also produced the Rotary Grader (figure 2). Capable of loading 60 to 100 cubic yards per hour, it could handle macadam pavement or dirt, and an optional screen could separate out aggregates from the macadam. The discharge conveyor could be set to either side of the cutting wheel, and cutting depth was two inches to two feet. It had seven forward and one reverse speeds, and the forward speeds were governed by the depth of cut. The operator maintained grade visually by sighting along grade stakes, and steered by operating one crawler to pivot against the other. These early 1920s machines were built on special order, and resemble in concept a finegrader built by Buckeye in the 1950s and 1960s and the “small” (at least as compared to the enormous true bucket wheel excavators) mass excavators that Barber-Greene introduced in the late 1960s.

Bucket loaders, which saw wide use from utility excavation to snow and stockpile loading in the 1920s through 1940s, were essentially bucket conveyors mounted on self-propelled carriers. The A. W. French & Company Utility Grader (figure 3) was a novel twist on the idea.

It traveled on crawlers, one of which is barely visible towards the right end of the machine. A leveling frame, supported at each corner by a powered jack, carried a set of rails upon which the bucket conveyor traveled. The rails could be shaped to any desired contour, following the concept of the templet excavator, and were interchangeable. A reversible discharge conveyor carried spoil to the side, for loading to trucks or windrowing at the roadside. Pointers on the leveling frame traced a roadside stringline to keep the business end of the conveyor on grade, some thirty years before Gurries Manufacturing Company and others introduced trimmers that used similar technology.

This unique machine was designed for everything from rough earthwork to finegrading to shoulder work. It is not known if it was continued by Blaw-Knox after they acquired French in 1929.

Barber-Greene also got into the primordial mass excavator act with this fearsome-looking beast, simply dubbed the Excavator (figure 4). Known to have been in production in 1927 and 1929, it appears to consist of ganged modified vertical trencher booms rigged to excavate ahead of the machine at grade, instead of towards the machine below grade as on a trencher. Judging by the attention being paid to it by the man peering into the works and the tensed posture of the well-dressed gent behind him, something may be amiss.

Barber-Greene re-entered the mass excavator market in the late 1960s with its WL50 Continuous Excavator bucket wheel excavator and stockpile reclaimer. The line was acquired by McNally-Pittsburg in the mid-1980s, then by Svedala Bulk Materials Handling in 1990.

From 1945 through 1948, Link Belt Speeder offered this unusual loader, the TF4 Tractoloader, as an attachment for the Cat D4 crawler tractor (figure 5). It was entirely hydraulic; the arms were raised by a single massive, reversed cylinder that levered the bucket upwards by pushing back towards the operator, and a hydraulic winch controlled the bucket’s motion. Its left and right rotation atop the tractor, about 90 degrees either way, is what set it apart from all others. The idea behind the loader was to eliminate turning the tractor between loading and dumping, thereby saving time, wear and tear. But the concept was far more successfully applied to loaders that simply carried the bucket over the tractor to dump behind it. An exceedingly rare machine, only 40 TF4s are known to have been built.