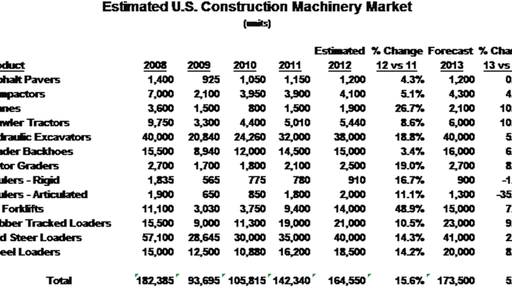 This year’s forecast has one major assumption: I believe the so-called fiscal cliff will be averted. Despite all the political rhetoric leading up to the presidential election, I believe Congress and the President will compromise and avert the sequestration event that was built into the legislation. Undoubtedly, the deals to make the compromise will result in higher taxes. I’ve assumed, perhaps naively, that everyone will be equally affected by those higher taxes. I have also assumed that the devastation caused by Hurricane Sandy will benefit the equipment business, but I do not believe it will have a material impact on business in 2013. Furthermore, I believe that the rental companies will benefit the most from the hurricane.

The demand for construction equipment will be driven by a recovery in the housing market. Other types of construction are expected to grow also, but the most dramatic change will be for housing.

It’s possible we will see a resurgence of building in the manufacturing sector. Whether that occurs depends on the enthusiasm businesses have for programs proposed and enacted by the Obama administration.

Spending on transportation projects is expected to grow as a result of the recently enacted Federal Highway program, MAP-21. Federal funding for highways at approximately $40 billion per year for 2013, and 2014 is considered to be inadequate long-term to replace dilapidated roads and bridges. However, it is approximately $3 billion per year more than the previous program. The highway bill provides for two years of funding which gives state governments a longer planning horizon for large projects. The previous legislation was a series of two month extensions which caused uncertainty within the states. MAP-21 provides more continuity for states. The only caveat is that many states have lower tax revenues than before the recession and can’t afford to fund new highway projects.

My view on the housing market is fairly positive. In fact, I believe it will provide the main strength for the machinery marketplace. The housing market is still at a historic low point, but the good news is housing starts are growing and are unlikely to go lower. Because starts got so low, the gains lately have been fairly dramatic percentage-wise—up more than 30% year-over-year.

The housing market trend has been good but growing very slowly throughout 2012. Housing starts bumped along (as can be seen on the bottom of the Housing Starts graph) at an annual rate of between 400,000 and 500,000 units starting in mid-2008 through 2010. That level of housing starts is the lowest recorded since 1947 when statistics were started. The magnitude of the decline from the beginning of 2007 to mid-2008 was unprecedented. The market is slowly clawing its way back to an annualized rate of one million units. In my view, we will have reached a real milestone when housing starts cross the one million unit line, likely in 2013.

Housing permits, which are a leading indicator of housing starts, have been positive since the beginning of 2012 which leads me to believe housing starts will improve throughout 2013. The rate of home foreclosures has declined for five months in a row. New family formations are also improving after a long dry spell. Home affordability has risen dramatically. The next step is for banks to loan money for mortgages, which will be key to the housing recovery. Hopefully Obama will help that with new home-affordability legislation.

What does the Obama re-election mean for housing? We can assume the president wants the economy to recover so that he leaves a positive legacy for his second term. It’s likely that the policies started by Obama in his first term will continue including:

The Federal Reserve has adopted a very accommodative policy that benefits housing. It added unemployment to its list of things to worry about. Unemployment among construction workers is more than twice the national total—17.6% in the latest month.

The Fed has decided to try and stimulate the housing market in order to reduce unemployment. It announced it will purchase mortgage-backed securities at a rate of $40 billion per month and put them on its balance sheet. Shifting assets to the Fed’s balance sheet is called “quantitative easing.” This is the third such effort and is referred to in the financial press as QE3.

The strength of the energy markets made 2012 a particularly good year for many equipment manufacturers, especially those that build drill rigs, pumps, compressors, gensets and the support equipment that goes with a fracking spread. Dealers located in places that previously had been small backwater markets such as Western New York, Western Pennsylvania, and North and South Dakota had banner years. There are towns in the Dakotas that were literally turned into boom towns because of oil drilling and hydraulic fracking. The discovery of natural gas in those regions will prove to be revolutionary for the U.S. and puts us on track to become energy independent within 10 years.

The good news is that there is an abundance of natural gas due to all the fracking activity. The bad news is that too much natural gas has pitted coal and natural gas against each other. Coal and natural gas are locked in what appears to be a race-for-the-bottom death struggle, pulling each other down as electric power plants switch from coal to natural gas. Historically, when the price of natural gas declined utilities management always considered these price fluctuations as temporary, due perhaps to mild temperatures or other factors. Management of power generation companies were reluctant to make the switch because they feared that as soon as they shifted from coal to natural gas, prices would go up if it was a very cold winter. This time, however, is different due to abundant cheap supplies and environmental regulations that favor gas. Analysts at the Energy Information Agency (EIA) believe it is likely that coal production will be under pressure for four years, after which it will begin growing again.

Natural gas fracking uses lots of equipment but is comprised of a much different mix of equipment than those used to operate a surface coal mine. The recent uncertainty in the coal market, and a dip in mineral commodity prices, caused equipment manufacturers to scale back production. For example, both Caterpillar and Liebherr have had layoffs at their mining truck manufacturing plants. Until a few months ago, everyone was sure that metal commodity markets would remain strong. Since then, iron and copper prices have pulled back to the point where some metal producers have scaled back the size of projects or cancelled some altogether.

Emission regulation implementation had an impact on new equipment purchases in 2012. The U.S. EPA Tier 4 Interim regulations began on January 1, 2012. The Environmental Protection Agency (EPA) mandated considerably lower toxic emissions for diesel engines. Equipment manufacturers have struggled to conform. Some manufacturers have been able to continue producing and selling machines with Tier 3 engines in them because of the accumulated EPA credits they can apply this year. However, in general, new machines sold since the first of the year have the Tier 4 Interim engines and are more expensive to purchase as well as to operate. The high cost part of the EPA rules pulled some equipment purchases into 2011, thereby taking away some sales volume from 2012. In addition, a fairly high percentage of equipment users rented equipment in 2012 because of the economic uncertainty and to avoid purchasing Tier 4 machines.

It appears that most rental companies shifted their fleet profile toward earthmoving equipment. United Rentals alone purchased more than $1.3 billion of new equipment. Fleet spending levels at rental companies for products such as skid steer loaders, rubber tracked loaders, compact excavators and small wheel loaders were up 10 to 14% year-over-year from 2011 to 2012. The rough terrain forklift market was up nearly 49%. This category includes telescopic boom forklifts.

The crane market, primarily hydraulic cranes, recovered in 2012 compared with 2011 benefiting from high levels of activity in the energy markets, especially on the Gulf Coast. It grew roughly 26.7% driven by aggressive buying by crane rental companies. The articulated truck market started a comeback in early 2012 with a nice double-digit growth rate but came to a virtual halt in the second half and finished the year up 11.1%. Most articulated truck producers stopped building their trucks in the third quarter and will probably keep their plants idle through the fourth quarter.

The 2013 market will benefit from an improving housing market, continued high levels of demand from the energy sector and improving non-residential construction investment by manufacturers. Overall I expect 2013 to have growth of 5.4% compared with 2012. The slowdown that began in the second half of 2012 will extend into the first half of 2013, and most of the 2013 growth will occur in the second half. Rental companies should continue their aggressive re-fleeting in 2013, however, most of those purchases will be for aerial platforms.

Frank Manfredi has been a market research consultant to the construction, mining, agricultural and material handling markets for 35 years. For more information, email him at frank@manfredi.com.

The 2013 market will benefit from an improving housing market, continued high levels of demand from the energy sector and improving non-residential construction investment by manufacturers.