Trucking along at a snail's pace

New regulations and a slow-to-recover economy will keep the trucking industry at a slow to moderate growth rate through 2013. 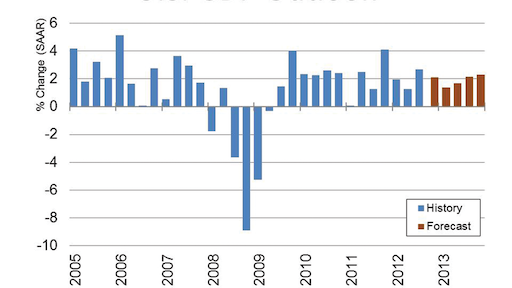 The U.S. economy has been very stable, albeit somewhat weak, during the current recovery. It continues to slog along between 2 to 3% most quarters, which is enough to drive growth in transport services, but not enough to accelerate demand. The economy lacks any real momentum right now, making it easier to justify a forecast that moves lower or one that goes higher. FTR Associates believes the economy will start the year off a little weaker with some moderate improvements as the year progresses. We expect full year 2013 to stay near the 2% mark.

Industrial production is a major contributor to freight demand. As such, it is a key indicator to watch. After slowing noticeably last year, we expect it to stabilize. It isn't likely to be as strong of a growth engine as we had early in this recovery, but it isn't expected to drop off either. Look for it to also stay around the 2% mark during the year, perhaps a smidge higher.

Since the industrial sector drives such a large portion of freight movements, the weakness during late 2012 is particularly compelling. If growth returns early this year, the truck carriers will be in for another solid, but unambitious, year. If the weakness continues, the fleets will be quickly adjusting their replacement and/or expansion plans.

Another cause for concern is the rising inventory-to-retail sales ratio that the Census Bureau has been reporting since last June. If the ratio shows further increases, a cut in manufacturing activity is quite likely. As of now it is not high enough to cause undue concern, but it is certainly worthy of attention during the first half of 2013.

The trucking industry has been through several rounds of big changes, but 2013 could be the biggest collective hit to the market since deregulation over 30 years ago. The three biggest acronyms on any fleet's watch list are: CSA, HOS and EOBR. The Compliance Safety Accountability (CSA) program is a collection of rules for monitoring and evaluating fleets and drivers put forth by the U.S. Department of Transportation's Federal Motor Carrier Safety Administration (FMCSA). It has been in place since 2011 but continues to get updated and revised. The additional regulations have led to a loss of 150,000 drivers available to the industry. The largest impact on drivers is Hours-of-Service (HOS) changes that are scheduled to be implemented in mid-2013. Delays are possible, but FTR Associates still anticipates that they are on track for implementation this year. This could impact trucking's productivity enough that the industry will be short by an additional 200,000 drivers by year's end. Electronic On-Board Recorders (EOBR) will eventually replace paper logs, but the when and how are up in the air. Don't look for anything concrete to happen this year.

As of now, we have seen no evidence that fleets are attempting to increase their capacity prior to the start of the HOS rules. We believe that there was a strong level of replacement activity during 2011 and early 2012 but that has slowed, indicating that new tractor demand is not being significantly driven by the need to upgrade equipment for drivers.

Where does this leave equipment demand?

As evidence, order activity for the last three months of 2012 was well above the prior six months, however, orders still disappointed in November and December. This confirmed our forecast of a weak start to 2013 and only modest recovery for the year. Full orders for all of 2012 came in at just 225,000 units, well below the actual build rate of 270,000.

FTR Associates is hopeful that the partial resolution of the Fiscal Cliff, and the extension of the accelerated depreciation for 2013, will help drive further demand this year, but we have seen no evidence that it is likely to accelerate demand to any significant degree.

The big swings in production for 2012 were caused by overbuilding, not by a major change in end-user purchases. Retail sales of Class 8 trucks in the U.S. rose just 10% in 2012 and we anticipate a modest decline of 5% for 2013.

Our data shows that inventory levels, relative to actual sales, have been too high since January of 2012. Likewise, the Backlog-Build ratio has been indicating production cuts were needed since last May. Anything reading below 4.0 months indicates cuts are necessary—we hit 3.1 months in August.

Look for production to bottom during the first quarter before starting to show a modest rebound of activity throughout the year. Basically, the worst of the situation is behind us. However, some of the data is not going to look ideal over the next several quarters. For example, the first two quarters of the year will average a year-over-year decline of nearly 25%. The year-over-year comparisons are going to take a big hit until the end of the year, but that isn't telling the full story right now.

By definition, any outlook has risks built into it. This year is certainly no different. If anything, there seems to be a much wider variance of potential outcomes during 2013 than we have seen during most of this recovery. The risks are too numerous to mention, but we'll boil them down to the three big ones: politics, Europe and history.

We would love for politicians to be the referees of our markets: the less is heard from them, the better they are doing at their jobs. Unfortunately, that's not how elected positions work in a democracy. So we will hear plenty from them. Truly comprehensive reforms are unlikely to be achieved this year.

Europe's problems look to be contained for the most part and the current recession there is being offset by modest growth in other regions of the globe. Keep a watchful eye on Europe, but don't expect it to be a game changer during 2013.

Our biggest worry right now is simply history itself. On average, the U.S. economy hits a recession or correction every five years. That puts 2014 squarely in our sights, but 2013 remains at risk, especially since we currently lack any strong momentum. While any economic downtick is certainly not going to be like what we just went through in 2009, we certainly do need to keep our eyes open to any indications that a severe softening is occurring.

Jon is the Director of Transportation Analysis with FTR Associates. He has spent his entire career in the freight transportation sector having joined FTR in 2001. Jon's expertise includes freight modeling, modal analysis, fleet characteristics and equipment demand.

Contact Jon with questions in regards to his article at jstarks@ftrassociates.com.

The sudden downturn in economic conditions and uncertainty over the duration of the COVID-19 crisis is limiting orders to short-term, definite needs.
ACBM Editorial Staff
April 3, 2020

Surge in Use of Mobile Robotics to Propel Market

ABI Research says the growing use of mobile robots for disinfection, monitoring and delivery will increase the market's value to $23 billion by 2021.
April 2, 2020

A recent industry conducted by CECE finds the current global health crisis will negatively impact about 60% of the European construction equipment market.
April 1, 2020

What is it like to live and work during this COVID-19 crisis? How is it affecting businesses big and small? What should future workers understand about this time? Share your Story of Strength with us.
ACBM Editorial Staff
March 30, 2020

ASV's Posi-Track loaders are now available in base- and premium-level configurations to offer more options to customers.
ASV LLC
March 20, 2020

An impact on construction is likely, but duration is unclear.
March 20, 2020

AEM says registrations for CONEXPO 2020 were over 130,000 and that it was one of the best editions of the show.
Association of Equipment Manufacturers (AEM)
March 18, 2020

European tractor registrations increased about 5% compared to the previous year.
March 17, 2020
Follow Us