The tractor crane came about in two forms: one design was to have the tractor tow a boom mounted on crawlers or an axle, and the other was to mount the boom directly to the tractor. 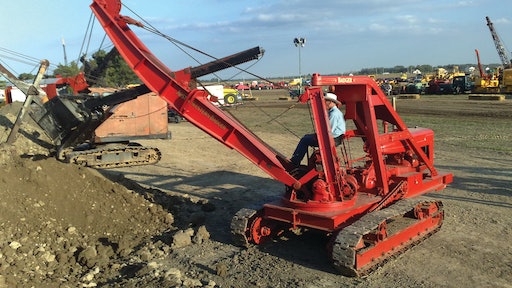 In the previous column, we looked at how excavator technology was combined with the industrial tractors of the 1920s to produce small shovels, backhoes and cranes for general construction use. The idea also went in another direction to combine the capacity of slightly larger shovels and cranes with a tractor’s mobility.

The tractor crane developed in a couple of different ways. One design was to have the tractor tow a boom mounted on crawlers or an axle, and the other was to mount the boom directly to the tractor. Either way, the boom was powered by the tractor’s engine.

The towed tractor crane was developed by R. G. LeTourneau in 1934, and his line of Tractor Cranes and Tournacranes was easily the most popular version of this design. These cranes were originally mounted on steel wheels, then on rubber tires for greater mobility. After LeTourneau perfected the Tournapull single-axle, rubber-tired prime mover in 1938, it became the power unit of choice for the Tournacrane. Tournacranes were marketed successfully to the Armed Forces for such diverse applications as clearing plane crashes and retrieving cargo from the surf. The design was carried forward by LeTourneau-Westinghouse, and then Wabco, until at least 1976.

LeTourneau also offered end- and side-mounted rigid booms for crawler tractors in limited numbers in the 1930s, a crawler-mounted towed dragline, and experimental rear-mounted revolving boom and backhoe arrangements on Tournapulls with front dolly axles. Where the towed crane was originally conceived to be interchangeable with other towed equipment, LeTourneau went on to produce larger, self-powered versions of rubber-tired towed cranes from 1954 through 1970.

The tractor-mounted boom was either revolving or fixed. The revolving boom was usually positioned on a frame over the tractor’s hood, and was popular in military applications during World War II. Many of these were sold into civilian service after the war. The revolving tractor boom was offered as late as the 1970s, and one wartime revolving boom design gave rise to today’s hydraulic crane.

Fixed booms were usually mounted to the right side or the rear of the tractor. Hyster Company’s Hystaway, which was available as a shovel, crane, dragline or backhoe, was one example of the rear-mounted boom. Attached to a Caterpillar D8, the Hystaway shovel and backhoe were rated at 1/2 cubic yard, and the crane could lift up to approximately nine tons.

The side-mounted boom was originally offered solely as an attachment, and gave rise in the 1950s to today’s purpose-built pipelayers. Superior mobility, combined with ease of transport and considerable lifting capacity from a small footprint, has given the pipelayer a second career in heavy railroad lifting. Along with placing pipe, it’s used for everything from lifting the end of a locomotive for replacement of a truck, traction motor or wheel set to clearing derailments. Of the various tractor crane designs, it is the only one still in production.