A Q2 analysis of manufacturers, dealers and rental companies for 2013

Manufacturers and dealers are both reducing inventory, which is contributing to the reported drops in sales. 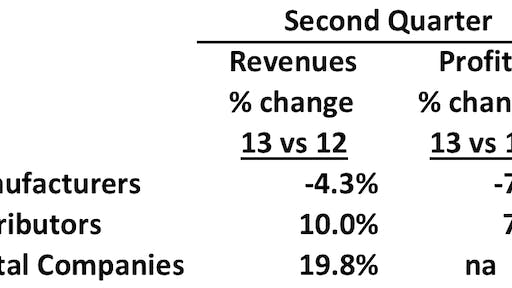 Everyone’s worried about the current state of the economy. I’ve been reading and analyzing the second quarter (Q2) results for as many of the publicly traded machinery companies as I can find to look for clues as to how 2013 will do compared with 2012. There are 25 or 26 companies that I track regularly. Not all of them have reported their quarterly results yet. And a few are on fiscal years that don’t coincide with calendar quarters, which makes comparisons difficult.

It’s interesting that the companies that are the closest to the customer are doing fairly well, especially equipment rental companies. Equipment distributors are next in line for okay results. The manufacturers are not doing as well. I’ve isolated North American volume where possible so that we can compare their performance in North America with North American dealers and rental companies.

Only United Rental and Hertz Equipment Rentals have reported their second quarters. They are both doing extremely well. Distributors are doing almost as well with both revenues and profits up. The manufacturers are having a problem.

So far, all manufacturers have reported down revenue (-4.3%) and lower profits (-7.1%). Sales incentives are starting to show up in the market, a sure sign that manufacturers want to boost retail sales. New machine warranties are being extended by several companies, and guaranteed fuel savings are being offered by a few manufacturers. Case recently came out with a program that is designed to greatly reduce the risk of ownership for their customers.

Cleveland Research, a Wall Street research firm, reported in a recent survey of Deere dealers: “We were surprised to learn that dealers continue to target inventory reductions as this was previously expected to be more aligned with demand by now. We are hearing some aggressive inventory de-stocking targets up to 20-30% in some cases.”

Some of the slow-sales problem can be traced to our slow-growth economy. The U.S.’s GDP grew 1.7% in Q2, which was slightly higher than expected. The government’s spending cuts due to the sequester were expected to slow Q2 GDP growth more than that. The housing market is inching up in fits and starts—with starts up one month and down the next. Construction unemployment finally went below 10% for the first time since 2008. Members of the Associated General Contractors are starting to express concern that skilled labor may be in short supply because so many workers left the industry during the downturn.

Economic uncertainty is contributing to slow new equipment sales and causing a trend toward rentals. I also believe the trend toward rentals is being caused by high machines prices for the new Tier 4 Interim-equipped machines being produced to conform to EPA emission regulations. Prices for Tier 4 Interim equipped machines are up anywhere from 5 to 20% compared with the Tier 3 versions. Many government jobs require contractors to use the latest emissions-compliant machines, especially in zones designated by the EPA as not meeting their requirements, which is often the case in urban markets. But for private construction jobs a lot of equipment owners are opting purchase good used Tier 3 equipped machines, rebuild their Tier 3 equipped machines or rent equipment when they need emissions compliant machines. A lot of small equipment owners, with whom I have spoken, told me that in the past they use to have two machines of every kind, one for backup. Now it’s more likely they will own one and rent another if they need it.

Manufacturers improving their order and production systems and processes have also had an impact. Both Deere and Caterpillar have production systems designed to provide their dealers with rapid build and shipment of machines. Those systems have reduced, but not eliminated, the need for dealer inventories. Again, Cleveland Research said, “The moderating demand and higher-than-normal inventory levels is leading to shorter lead times from Deere. We now see lead times in the 30-60 day range in most cases depending on product category and order classification (retail vs. stock order).”

Most everybody is making optimistic outlook statements for the second half of 2013. One manufacturer told me he thinks that if 2013 is flat compared with 2012 he will consider it a good year. I think that is as good an estimate of how 2013 will turn out as any I can come up with.

A first look at the equipment markets in 2014