The towed crane was a low-cost crane that could be hooked to the back of a tractor to gain mobility or self-propulsion without the cost of having its own powertrain. 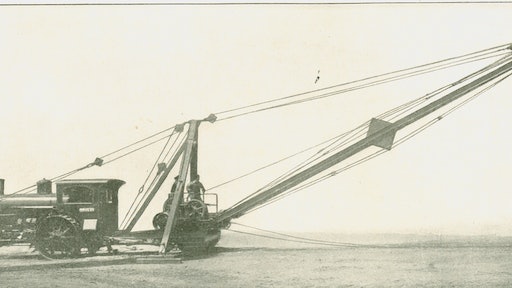 The idea of a towed crane was to create a low-cost crane, or excavator, that could be hooked to the back of a tractor for the sake of portability, thus gaining the mobility of truck mounting or self-propulsion but without the cost of having its own power train.

The earliest example of this design known to this author is the Traction Steam Shovel and Crane built by Avery Company of Peoria, IL, circa 1909. While Avery called it a shovel, it was in fact a dragline, with 3/4- and 1-yard buckets offered for it, but designed like a guy derrick. This derrick was equipped with a 40-foot boom (or shorter, by special order), and Avery also built the steam traction engine that powered and moved it.

Given the state of technology at the time, one of Avery’s selling points was that it was free traveling, not requiring railroad track on which to run. Also, the entire rig could be moved without disassembly and reassembly, although long-distance moves required knockdown. Supporting cables for the boom were hooked to either side of the smokebox at the front of the tractor, and the crane was coupled to the traction engine’s drawbar; by uncoupling the crane and detaching the cables, the traction engine could be freed for other needs.

The coupler included a double-swivel steam joint that served to convey steam from the traction engine’s boiler to two double cylinders on the crane’s machinery deck, and to return exhaust steam to the engine’s smokestack. The crane was operated by two men standing side by side at the base of the boom – seats had not yet become standard on many machines – with one man working the friction clutches by means of levers and pedals, and the other operating the swing.

The towed crane really hit its stride through the designs of R. G. LeTourneau. Responding to the need for an economical, mobile, large capacity crane, LeTourneau in 1934 developed a single-axle, steel-wheeled crane for use behind a crawler or wheel tractor. The crane was just that, a nearly vertical mast and an overhanging boom, and the boom and hook were raised and lowered by a winch on the back of the tractor. The only swing function was at the tractor’s drawbar, and was achieved by manipulating the crane relative to the tractor.

Numerous variants of the design followed, and by 1938 rubber-tired versions were being offered. When LeTourneau introduced the Tournapull, the world’s first single-axle, rubber-tired prime mover, the crane became one of a number of attachments for it, and it was dubbed the Tournacrane.

Tournacranes were popular in the U.S. Armed Forces for such applications as retrieving crashed aircraft and unloading cargo from landing craft; the latter application earned them the name of surf cranes in the Vietnam war. Tournacranes and their successors were offered by LeTourneau-Westinghouse and Wabco until 1975.