Originally marketed as a trenching machine, the hydraulic backhoe's capabilities as a mass excavating machine took years to be realized. 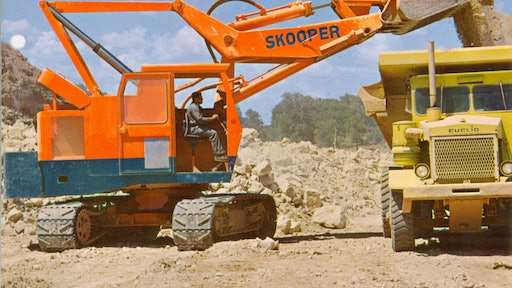 A Koehring 505 Skooper loads out a Euclid end dump.

As hydraulic excavators began gaining traction in the American construction market in the early 1960s, they were typically fairly small machines of a yard or less capacity.

In 1963, Koehring Co. introduced the world’s largest hydraulic backhoe, the 505. Along with the advantages of smaller hydraulic backhoes over cable machines, such as undercutting, ease of pavement removal, and fast, positive boom and bucket action, it brought unprecedented size to the market.

The 505 backhoe could cut trench on the level for 8 feet at 25 feet digging depth, reach 39 feet forward, and lift 45,000 pounds at a 15-foot radius over either end. The bucket could pivot 133 degrees, which combined with 53,500 pounds of hoist force, 35,600 pounds of crowd force and 35,600 pounds of wrist action force gave it tremendous digging power. Its 2-yard capacity was the largest on the market.

Even with these advantages, the 505 backhoe was still marketed as a trenching machine, and it would be years before the hydraulic backhoe’s capabilities as a general mass excavating machine would be exploited.

The 505 broke ground, as it were, in another way as well. It was also offered as the first heavy-duty all-hydraulic shovel on the American market. Koehring had produced a cable/hydraulic hybrid shovel called the Skooper for several years, and the Skooper name was applied to the 505 as well.

The first hydraulic shovel in America was the French-designed Yumbo, which was marketed in the U.S. by Drott Manufacturing Corp. starting in the early 1960s. But like the other hydraulic backhoes of the time, these too were relatively small machines with a maximum capacity of 1-1/4 yards. Rather then heavy excavation, they were better suited for and marketed to lighter duties such as stockpile and bank earth loading. The Yumbo shovel had distinct advantages over wheel and crawler loaders, as well as cable shovels, but the concept was capable of far more.

The 505 Skooper was the first machine to begin fulfilling that potential. Along with 4-1/4 yard general purpose and 5-yard rehandling buckets for the work the Yumbo could do, it could be equipped with a 3-1/2 yard bucket for rock excavation. (The two smaller buckets were later combined into a 4 yard bucket.)

Working from one position like a cable shovel, the 505 Skooper could crowd on the level for 10 feet like a wheel or crawler loader, but it eliminated the wear and tear a loader suffered cycling between the bank and the dump. It was marketed as being less expensive and, at 92,000 pounds, easier to move than a 1-1/2 yard capacity cable shovel, and able to dig tougher material than a 2-1/2 yard cable shovel.

The Koehring 505 was in production until about 1970, and Koehring continued to build hydraulic shovels until at least 1982. While the Skoopers were well suited for general construction and quarry work, they laid the groundwork for the massive hydraulic shovels now used in high-production mining operations.

The Historical Construction Equipment Association (HCEA) is a 501(c)3 non-profit organization dedicated to preserving the history of the construction, dredging and surface mining equipment industries. With over 4,000 members in 25 countries, its activities include publication of a quarterly educational magazine, Equipment Echoes; operation of National Construction Equipment Museum and archives in Bowling Green, OH; and hosting an annual working exhibition of restored construction equipment. Individual memberships are $32.00 within the USA and Canada, and $40.00 US elsewhere. HCEA seeks to develop relationships in the equipment manufacturing industry, and offers a college scholarship for engineering and construction management students. Information is available at www.hcea.net, by calling 419-352-5616 or e-mailing info@hcea.net.