The advent of pneumatic rubber tires enabled the development of a wheeled alternative to crawler tractors which could provide increased speed and mobility in certain applications. 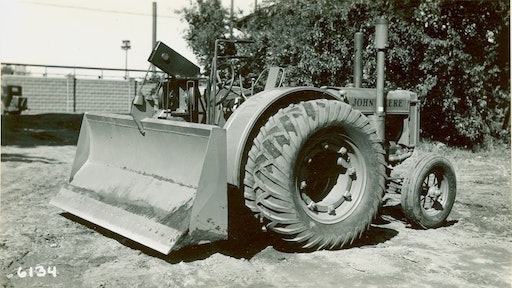 For all their practicality and versatility in construction, logging, mining and other applications, crawler tractors faced some limitations.

One was mobility. While the cleated tracks gave superb traction on rough ground, they were brutal on finished surfaces, easily scarring concrete and penetrating and breaking asphalt pavement. Smooth street pads had to be installed to use them on such surfaces, and moving them on pavement required either transport on a truck or trailer, or placing dirt, timbers or some other protective material on the surface.

Another was durability. The undercarriage carried the weight of the tractor and its attachments, and the sprockets also bore the stress from the powertrain, imparting its force on the crawlers. If the tractor was working in sand, salt, rock or other abrasives, the wear to all the undercarriage components was compounded, and undercarriages were never inexpensive to repair or maintain.

There was also the matter of speed. Regardless of the surface upon which it moved, crawler tractors were by their nature slow.

With the advent of pneumatic rubber tires suitable for such machines, the possibilities arose for a wheel tractor to become a viable alternative to crawler tractors in certain circumstances. While they lacked a crawler tractor’s pulling power, they could be roaded and had a higher speed range. They also eliminated a crawler tractor’s undercarriage maintenance and repair costs, but could not be used in materials that would unduly damage the tires.

But one thing was lacking – the ability to push. R. G. LeTourneau was the first inventor to address this need. Never one to shy away from innovation, as early as June 1936, he experimented with mounting a dozer blade on the back of a John Deere D farm tractor.

The seeds of this prototype started to bear fruit in 1944. Faced with the need to expand his product line in light of the loss of his arrangement to provide attachments and allied equipment for Caterpillar, LeTourneau started development on the world’s first purpose-built rubber-tired dozer. The first operating prototype, the 300 hp (223.71 kW) T200 Tournadozer, was designed as a pushloading tractor, but as the line evolved the Tournadozers found uses in many other applications, as well.

In the 1960s and 1970s, the wheel dozer gave rise to the embankment and landfill compactors in use today. Modern wheel dozers are much larger than most of their predecessors, and are used largely in mining and coal handling applications. While pushloading applications have vanished with the general demise of large scraper operations and the advent of more powerful crawler tractors, this line of work led to the development of some remarkable offshoots that we’ll look at next time.

The Historical Construction Equipment Association (HCEA) is a 501(c)3 non-profit organization dedicated to preserving the history of the construction, dredging and surface mining equipment industries. With approximately 4,000 members in 25 countries, activities include publication of a quarterly educational magazine, Equipment Echoes; operation of National Construction Equipment Museum and archives in Bowling Green, OH; and hosting an annual working exhibition of restored construction equipment. The 2017 show will be November 3-5 at the Ederville Train and Tractor Show, Carthage, NC, USA. Individual memberships within the USA and Canada are $35 for one year, $65.95 for two years and $99.95 for three years, and $45.00 U.S. elsewhere. HCEA seeks to develop relationships in the equipment manufacturing industry, and offers a college scholarship for engineering and construction management students. Information is available at www.hcea.net, by calling 419-352-5616, or e-mailing info@hcea.net.