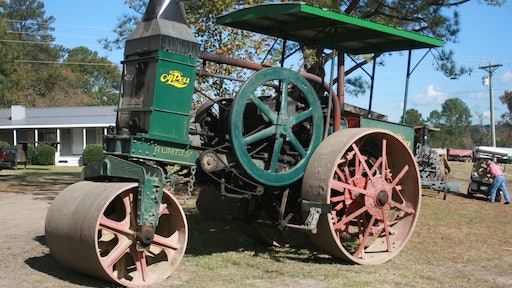 Given the pronounced upward tilt of the frame to the front drum, this very rare Rumely Oil Pull three-wheel roller is probably a conversion of a traction engine. It was the featured machine at the Historical Construction Equipment Association’s 2017 International Convention and Old Equipment Exposition in Carthage, NC, and is owned by show host Ken Eder.
Photo by the author, HCEA Archives

Steam rollers came into their own in the 1870s, and demand for the smooth, hard-packed road surfaces they produced soared with the explosion of the bicycle craze in years following. And with the advent of motorized vehicles, the Good Roads Movement advocating for paved roads developed in the early 1900s.

The three-wheeled steam roller could be either a purpose-built machine or a modification of a steam traction engine, whereas tandem rollers were almost always purpose-built, conversion of industrial tractors into small rollers notwithstanding. The drums were originally spoked, but eventually the spokes were replaced by side walls so that the drums could be filled with water for added weight.

A three-wheeled roller’s front drum is actually two drums fitted closely together on a yoked axle for easy steering without slipping, scuffing and dragging. The two rear drums propel it and provide the majority of compaction as they slightly overlap the path of the front drum. The most common working weights were 10 or 12 tons.

Because its two drums span the full width of the machine, resulting in a larger surface contact footprint, a tandem roller imparts less compaction per ton of machine weight compared to a three-wheeled roller. The full-width working area made it suitable for finish rolling of asphalt and base material.

The largest tandem rollers, known to have been built by Galion, Buffalo-Springfield and Ingram, weighed 13 tons bare and 20 fully ballasted. Their tremendous weight was due to having a second full-width steering drum, giving them the name “three-axle tandem.” At the other end of the scale, 3 to 5 and 4 to 6 ton rollers were offered by several builders with retractable side tires for towing, and even smaller tandem rollers have been used for everything from sidewalks, turf and tennis courts to parking lots and driveways.

Early three-wheel rollers could also perform a variety of maintenance tasks on gravel and dirt roads besides compaction, by pulling or being equipped with a scarifier and grader. Attachments for additional compaction were also available for three-wheel rollers, including a full-width auxiliary drum for underframe or rear mounting and an array of vibratory plates for the rear.

On the other hand, tandem rollers didn’t enjoy this versatility. However, Galion offered a vibratory attachment for the middle drum of its three-axle tandems to give even more compactive force, and in the mid-20th Century at least company offered a segmented-wheel steering drum for tandem rollers for embankment work.

The Historical Construction Equipment Association (HCEA) is a 501(c)3 non-profit organization dedicated to preserving the history of the construction, dredging and surface mining equipment industries. With approximately 4,000 members in twenty-five countries, our activities include publication of a quarterly educational magazine, Equipment Echoes; operation of National Construction Equipment Museum and archives in Bowling Green, OH; and hosting an annual working exhibition of restored construction equipment. Our 2018 show will be August 24-26 at the Le Sueur Pioneer Power Show, Le Sueur, Minnesota, USA.