A new report from Grand View Research says increased infrastructure development around the world will cause the global heavy construction equipment market to reach achieve a CAGR of 5.4% from 2017-2025. 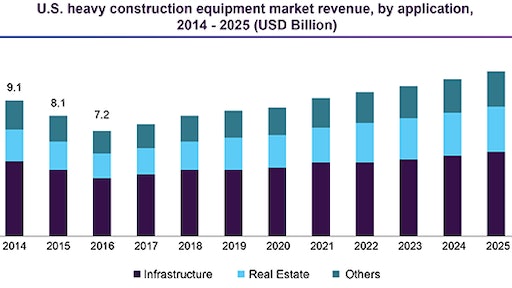 The global heavy construction equipment market is expected to reach USD 90.4 billion by 2025 at a CAGR of 5.4%, according to a new report by Grand View Research Inc. Increased investment in infrastructure has been a major factor driving market growth.

Heavy construction equipment market is likely to witness high demand due to various government initiatives to expand airports globally. As of January 2015, global investments for construction of airports was nearly USD 540.0 billion. For instance, news reports suggest that the total number of passengers traveling via Mumbai (India) airport has tripled in the last decade. To overcome this, the Indian government has approved an investment of USD 2 billion for the construction of the Navi Mumbai airport, which will help distribute domestic and international passengers. Development plans such as these are sure to give the global market a major boost.