Use of a Wirtgen WR 250 soil stabilizer in Indiana enables newly embanked earth to be stabilized for load bearing capacity while reducing project time and resources. 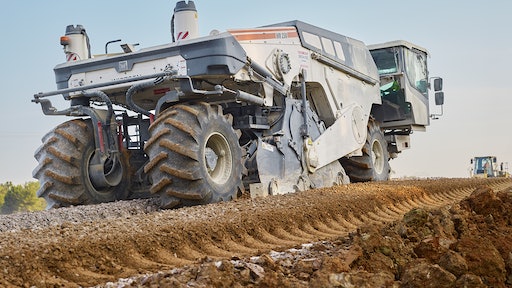 Soil stabilization is proving to be the optimum solution whenever the properties of soil have to be altered to make it suitable for further roadworks. That was the case in Bloomington, IN, for instance, where a WIRTGEN WR 250 soil stabilizer laid a load-bearing base for the construction of a new approach road to Interstate 69.

Soil stabilization is the method of choice when it comes to ensuring the load-bearing capacity and quality of soil in preparation for road construction projects. The targeted addition of stabilizing agents can, for instance, help to reduce the moisture content of soil, which is vital for further roadworks. Compared to the process of exchanging the entire soil, soil stabilization is an economical and resource-saving method. Cost savings result from the simpler job-site logistics, for instance, with fewer lorry trips and shorter construction periods. Resources are also conserved, because all of the existing soil is used in the stabilization process with only stabilizing agents such as lime or cement being added – or a combination of both in the form of a mixed stabilizing agent.

Many invitations to tender continue to specify that the soil is to be exchanged – but this is no longer a state-of-the-art method. The Wirtgen soil stabilizer uses its powerful milling and mixing rotor to mix pre-spread stabilizing agents such as lime or cement into existing soil with insufficient bearing capacity, transforming it into a high-grade building material right on the spot.

The homogeneous mixture of soil and stabilizing agent that is produced offers a high load-bearing capacity as well as lasting resistance to water and frost, and volume stability. Typical applications include the construction of paths, roads, motorways, routes, parks and sports grounds, industrial estates, industrial plants, airfields, dams, backfilling and landfills.

In soil stabilization, a distinction is made between improving the soil and stabilizing it. Lime improves the paving properties and compactability of wet, cohesive soil. This is known as soil improvement. If the aim is to stabilize the soil cement is used because it lastingly enhances the load-bearing capacity, volume stability and resistance to water and frost. Soil can be stabilized or homogenized even without the use of stabilizing agents.

In the soil stabilization project on Interstate 69 south of Indianapolis, the newly embanked earth first had to be stabilized in order to create the necessary load bearing capacity for the asphalt pavement of the new approach road. The contractor, Specialties Company, LLC, used lime as a stabilizing agent and took advantage of Wirtgen’s applications expertise. Lime immediately reduces the water content in the soil and binder mix. This ultimately improves compactability and increases the load-bearing capacity of the treated soil. “To achieve the optimum outcome, we always liaise closely with the applications professionals from Wirtgen. They are always on hand to offer their consulting expertise,” explains Jamie Cardiff, Equipment Manager at Specialties Company.

When it came to choosing the machine, too, the Specialties Company’s team put their trust in the innovative technologies from Wirtgen, opting for the WR 250 wheeled soil stabilizer. The 571 kW powerhouse also used, among other applications, in cold recycling for granulating asphalt, is the most powerful machine in the WR generation and specially designed for the stabilization of heavy and boggy terrain. With this machine, daily performances of up to 15,000 m2 are far from uncommon in soil stabilization applications. After the lime had been pre-spread, the high engine power and optimum traction of the WR 250 enabled it to effortlessly work through the heavy and sometimes deep soil. The WR mixed the soil and binding agent homogeneously across the entire working width of 2.4 m to a depth of exactly 30 cm.

“Operating the machine is child’s play. The multifunctional joystick on the right armrest, for instance, gives me easy control of all the main basic functions,” says Richard Clark, describing the high operating comfort. One of the challenges was the uneven condition of the earth, which varied from very firm to loose. “The milling speeds can be controlled from the operator’s cabin, so our machine operators were able to respond directly to the frequent changes in soil conditions. This ensured a high mixing quality at all times,” Cardiff adds. It took just 5 days to complete the stabilization work and lay the load-bearing base for the new approach road to Interstate 69. Lorries carrying material for paving the asphalt layers began to roll onto the job site only a short while later.