Oshkosh says there has been growing global interest in its JLTV design. 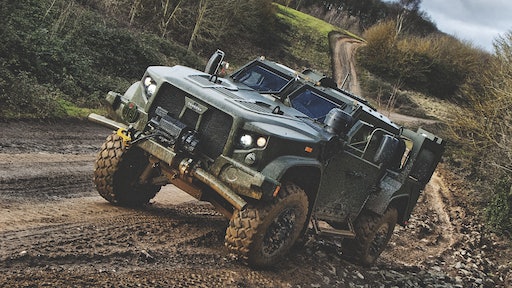 Oshkosh Defense LLC, an Oshkosh Corporation company, will showcase the Joint Light Tactical Vehicle (JLTV) in Europe this week at the Defense and Security Equipment International (DSEI) show from September 10-13, 2019.

“We’re very pleased to be at DSEI this week with our Joint Light Tactical Vehicle,” says Mike Ivy, Senior Vice President and General Manager, International Programs at Oshkosh Defense. “We’re even more pleased to share that international interest in the JLTV platform continues to grow,” Ivy continued. To date, the United Kingdom, Lithuania, and Slovenia have publicly expressed interest in procuring the JLTV.

“Oshkosh is committed to delivering an extremely affordable, highly connected and protected solution to our valued U.S. allies,” Ivy adds. “In fact, we’ve successfully executed several of the most challenging demonstrations and trials just this year.” The JLTV not only met but exceeded the rigorous demands it faced, including many failure-free miles both on-road and off-road.

“The U.S. Army and Marine Corps have plans to purchase 49,099 and 15,390 respectively, and now our allies know why. There is simply nothing quite like the JLTV,” Ivy concludes. The Marine Corps Combat Development Command, Combat Development and Integration also recently announced that the JLTV program has reached Initial Operational Capability (IOC), nearly a year ahead of schedule. To date, the U.S. government has ordered over 11,000 JLTVs and Oshkosh has delivered over 750 to the U.S. Army and Marine Corps.

The JLTV provides U.S. and allied forces around the globe with a next generation, lightweight, all-terrain vehicle that is protected, mobile, transportable and connected.

The Oshkosh JLTV will be on display in the Oshkosh Defense booth #N3-650 at Defence and Security Equipment International (DSEI) from September 10 through September 13 at the ExCel Centre, London, U.K.

From raw materials and the supply chain to alternative fuels, the industry and the timing of equipment conversations are undergoing changes.
T/CCI Mfg. LLC
June 23, 2022
Latest
Military