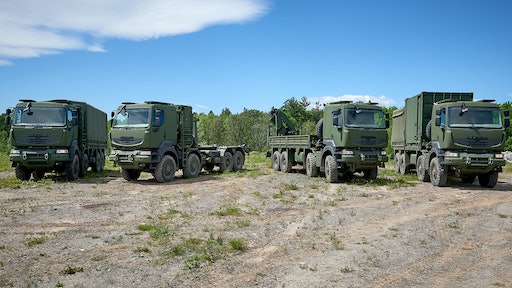 Mack Defense has assembled the 1,587th and final truck for the Medium Support Vehicle System (MSVS) Standard Military Pattern (SMP) program. The truck rolled off the assembly line on Feb. 13 in Saint Nicolas, Quebec in front of a select group of dignitaries, military officials and Mack Defense employees.

“Mack Defense is proud to have completed the build out of these trucks, and we look forward to continuing the program and supporting the more than 1,500 MSVS trucks that will be in service with the Canadian Armed Forces,” says David Hartzell, President, Mack Defense. “This program demonstrates the global reach and collaboration Mack Defense is capable of.”

Mack Defense is part of the Volvo Group and leveraged the group’s large industrial footprint and global capabilities to engineer and produce the MSVS SMP trucks. Before final production took place at a Prevost facility in Saint Nicolas, additional work was completed at facilities located in Bourg-en-Bresse, Marolles, Blainville and Limoges, France. The MSVS SMP program was coordinated through Mack Defense headquarters in Allentown, PA.

Mack Defense was awarded two contracts in 2015 valued at $725 million CAD by the Department of Public Works and Government Services Canada on behalf of the Department of National Defense. The contracts called for Mack Defense to deliver more than 1,500 8x8 MSVS SMP trucks, including variants such as cargo, material handling cranes, load handling systems (LHS) and mobile repair trucks (MRT).