AEM Launches 'Behind Every Product' Campaign

AEM has launched a new advertising campaign to help inform the U.S. government of the role the heavy-equipment industry plays in the economy. 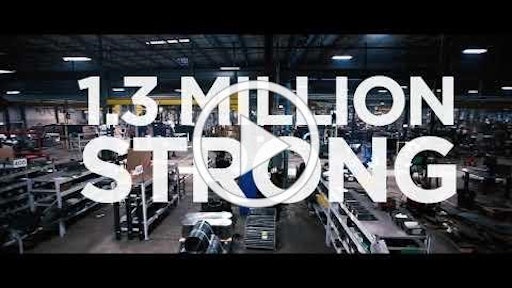 The Association of Equipment Manufacturers (AEM) launched a major new advertising campaign to promote the economic contributions of the equipment manufacturing industry among Washington influencers.

AEM launched its new campaign, “Behind Every Product,” with a video, print and digital advertising blitz across Beltway publications. You can watch the 60-second spot below:

“Equipment manufacturers want to be sure that President Trump, members of Congress and other leaders in Washington understand the size and scope of our industry,” says AEM President Dennis Slater. “We want everyone to understand that behind every piece of agriculture or construction equipment is a story of a hardworking American who is able to support a family because of our industry.”

A report produced earlier this year by the independent research firm IHS Markit found that the equipment manufacturing industry supports 1.3 million jobs across the United States, and contributed $159 billion to the GDP of the United States. The report also found the industry generated almost $87 billion in labor income in 2016, and that about 30% of equipment produced in the United States is eventually intended for export.

The “Behind Every Product” initiative was launched as part of I Make America, AEM’s grassroots campaign that engages and mobilizes industry employees to advocate for pro-manufacturing public policies. This year the I Make America campaign is bringing elected officials from both parties to tour manufacturing facilities across the United States.

“This campaign salutes the men and women of the equipment manufacturing industry for their hard work building the products that enable all of us to have a better way of life,” says Kip Eideberg, AEM Vice President for Advocacy and Public Affairs. “We need our elected officials in Washington to work equally hard to advance the policy priorities important to our industry.”

AEM will detail expanded elements of the campaign in the weeks to come.