FTR's Trucking Conditions Index showed a 30% month-over-month improvement in December, reflecting the drop in fuel prices during the period. 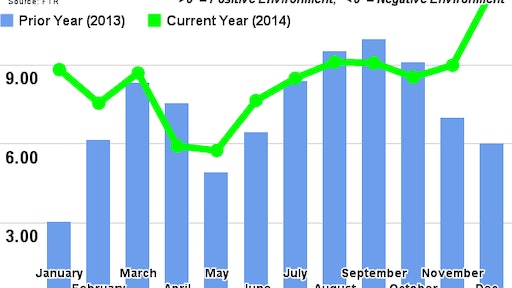 FTR’s Trucking Conditions Index (TCI) for December improved 30% month over month to a reading of 11.80 reflecting the dramatic drop in fuel costs during the period. Freight growth also remained strong with contract rates continuing to rise. FTR expects a modest relaxation of capacity constraints in 2015, along with a bounce back in diesel prices to keep the index in an 8 to 9 point range through the year.

Details of the December TCI are found in the February issue of FTR’s Trucking Update, published January 30, 2015. The ‘Notes by the Dashboard Light’ commentary looks at what to expect from the truck market’s current euphoric stage that is typical in late recoveries. Along with the TCI and ‘Notes by the Dashboard Light,’ the Trucking Update includes data and analysis on load volumes, the capacity environment, rates, costs, and the truck driver situation.

Jonathan Starks, FTR’s Director of Transportation Analysis, comments, "Fleets were hitting their stride to finish the year, led by a dramatic drop in diesel prices and continued strength in contract pricing. However, there are several indicators that lead us to exercise caution as 2015 plays out. First, diesel prices have to stop going down, and recent data points to that occurring. That leads to a strong potential for diesel prices to rise later in the year. FTR’s outlook assumes modest increases, but the energy markets don’t always work that way. Next, capacity is finally being added to the marketplace just when the HOS rollback is being implemented. Truck ordering activity at the major builders hit 375,000 units in 2015, well above the 295,000 units that they actually produced. Those units will spill over into 2015 as carriers add or replace the trucks in their fleets. Lastly, spot market data from truckstop.com highlights that the market has returned to normal this year following a very capacity-constrained winter and spring in 2014. That will make year-over-year comparisons look much worse until late in the year. Despite these worries, the market is still running pretty tight and economic growth is anticipated to stay at a solid pace. Look for truckers to be hit by both headwinds and tailwinds during 2015 but be able to stay the course.”