Non-residential construction, led by manufacturing and commercial buildings, should see a sharp rebound in the second half of 2015, says Wells Fargo Senior Economist Anika Khan. 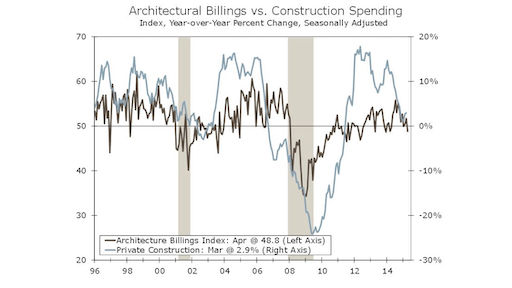 The American Institute of Architects' Architecture Billing Index (black line) indicates billings growth whenever it is above 50 (left axis). The index is considered to be a pretty reliable leading indicator of private construction activity 9 to 12 months in the future.

Non-residential construction, led by manufacturing and commercial buildings, should see a sharp rebound in the second half of 2015, says Wells Fargo Senior Economist Anika Khan.

Khan spoke to attendees at a regional AEM membership event hosted by Cummins Inc. at the company's headquarters in Columbus, IN.

Sixteen attendees from eight member companies participated in the regional membership meeting, which is part of an enhanced meeting strategy that offers attendees more value-added content and improved opportunities for networking and discussion.

Khan said the underlying fundamentals for the construction industry – and the economy as a whole – are  much better than the numbers would indicate, noting that first quarter GDP seemed to show that the economy was shrinking.

Based on expected revisions to GDP as well as alternative measurements of economic activity, she said, it’s clear that while the pace of growth is sluggish, “it’s definitely not negative.”

Khan said key factors holding back economic growth in the first half of 2015 included:

While the first two factors have dissipated, there are still lingering effects from the stronger dollar and lower oil prices, she said.

Khan said the labor market is “the real strength of the economy” and should continue to grow. However, she said, manufacturers needed to watch for not an increase in interest rates, but a “winding down of the Fed’s balance sheet” as it begins to scale back on its investments.