November trailer net orders reached 39,300 units, up 19% from the previous month and the third highest month on record says FTR. 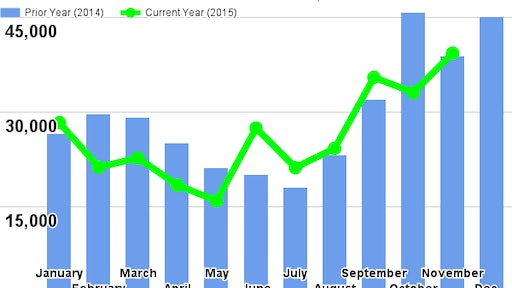 FTR reports November 2015 U.S. Trailer net orders exceeded expectations for the second consecutive month at 39,300 units, the third highest month on record. The order total for the month was up 19% month-over-month (m/m), and 1% above a year ago. Trailer orders have now totaled 332,000 for the past 12 months.

Dry van orders for November were exceptional, up 44% m/m and the best since December 2014. Refrigerated vans, while lower than the record numbers experienced in October, remained robust for the third straight month. Dump trailer orders showed continued strength; and all other segments met expectations, resulting in mostly positive across the board order intake for the month. Trailer build was up 4% (per day) versus October.

Don Ake, FTR Vice President of Commercial Vehicles, comments, “The trailer market continues to show remarkable resilience entering 2016. This is the third highest order month ever and some segments aren’t even doing very well.  It is particularly impressive, considering Class 8 demand is faltering and freight growth is slowing somewhat due to the manufacturing slump. Demand is still strong because the replacement cycle for dry vans remains very favorable. The recession and slow recovery delayed some replacement demand, and carriers are still modernizing their fleets. In addition, fleets are being encouraged to place their entire 2016 requirement orders now, due to continuing OEM capacity constraints.”