FTR's Shippers Conditions Index declined to a reading of -3.1 in October and is expected to decline further in 2016. 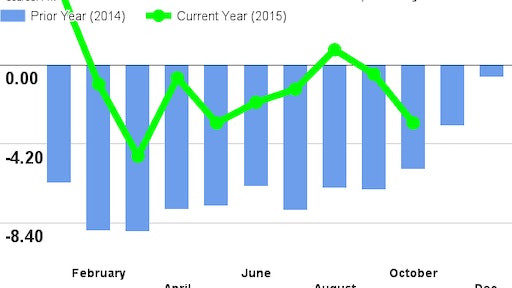 FTR’s Shippers Conditions Index (SCI) for October declined from the previous month to a reading of -3.1. The SCI, which has a forward-looking aspect, will fall further in 2016 with truck freight forecasted to grow at a robust 3.6%. Shippers will ultimately be negatively affected by tight capacity in the second half of 2016.

The SCI is a compilation of factors affecting the shippers transport environment. Any reading below zero indicates a less-than-ideal environment for shippers. Readings below -10 signal conditions for shippers are approaching critical levels, based on available capacity and expected rates.

Jonathan Starks, Chief Operating Officer at FTR, comments, “It has been an eventful year in transportation during 2015. Washington has not gone unnoticed, as it has been playing an ever increasing role in our markets. Much of the activity in Washington came down to the last couple of months with the passage of a full transportation bill and the long-awaited release of the regulations for electronic logging devices (ELDs) for truck drivers. The regulatory pressures will only be increasing over the next few years as the recently introduced regulations finally get implemented. After a very tight trucking environment along with worsening service on the rails during 2014, the situation over the last year has, at a minimum, stabilized and much of the market is experiencing some softness. However, contract prices are still rising and truck capacity is still tight compared to historical levels.”

Starks says that “2016 is likely to start off with more of the same to end 2015 – businesses are still holding on to too much inventory but capacity utilization will remain elevated. We don’t expect to get a significant change in the operating environment until the latter half of 2016 – and more significantly in 2017 – as we prepare for a slew of regulatory implementations starting in late 2017. The big caveat is whether the economic situation can be sustained. Most indicators point, again, to more of the same; however, pessimism has grown and will continue to grow until manufacturing can show some strength outside of automotive. Many shippers seem to be preparing for the coming truck shortage and are making sure that their operations and logistics partners are in line with their needs. If 2016 proceeds as expected, that seems to make it a good year to implement those plans.”