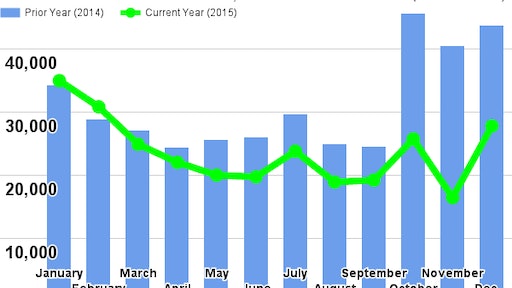 FTR has released preliminary data showing December 2015 North American Class 8 truck net orders at 27,800 units, a 70% improvement over a disappointing November and considerably above expectations. December 2015 orders were down 36% year-over-year (Y/Y). When combining November and December, Class 8 orders were close to the average for the past 10 months and totaled 284,000 for the year.

Don Ake, FTR Vice President of Commercial Vehicles, comments, “The improved December orders provide some needed stability to what was a shaky Class 8 market. Orders have averaged about 22,000 per month for the last 10 months and in Q4 averaged 23,300; so the orders have been very consistent for a while, just at a lower level. The improved December orders are not high enough to prevent the announced production cuts however.

“The December orders show there is still solid demand for Class 8 trucks in 2016. This is much welcomed news after the very concerning November total. Backlogs will actually increase in December for the first time since February. Orders should retreat some next month, with the industry in a more balanced state once the planned production cuts are complete.”