Preliminary data from FTR shows Class 8 truck orders in January decreased, and 2016 is not looking to be a strong year for order activity. 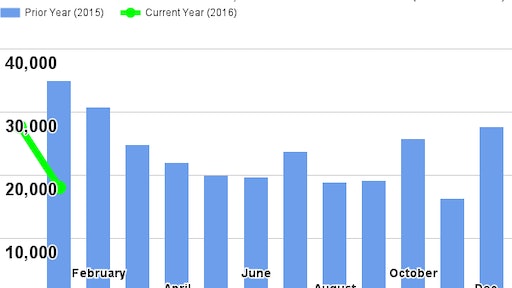 FTR has released preliminary data showing January 2016 North American Class 8 truck net orders slipping back to 18,062 units, down 35% month-over-month (M/M) and 48% year-over-year (Y/Y). Net Class 8 orders for five of the last eight months were below 20,000 with a monthly average for the period of 21,200 units. Since September, order activity has been unusually volatile with the minimum monthly swing more than 6,500 units. January Class 8 orders annualized to 217,000 units.

Jonathan Starks, Chief Operating Officer at FTR, comments, “Orders in 2014 equaled a strong 376,000, 2015 was down from that to just 284,000 orders and now 2016 is starting off even weaker. It is not looking to be a strong year. However, the fundamentals for freight and demand for truck services should hold up well enough to keep the market at replacement levels. In order to see that occur we would expect to see orders improve as we get into the spring months and fleets finalize their plans for 2016 expenditures.”