FTR reports Class 8 orders in August were above expectations, and 36% improvement over July orders. 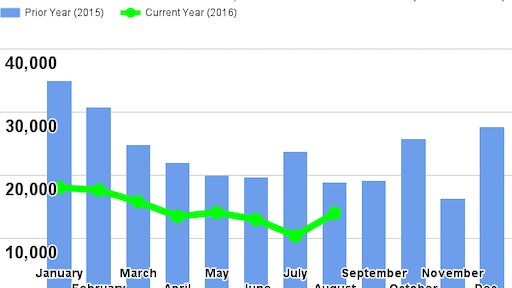 FTR releases preliminary Class 8 net orders for August at 14,000 units, slightly above expectations and a 36% improvement over July. However, the Class 8 order activity for August was the weakest for that month since 2010 and down 35% from August 2015. Class 8 orders for the last 12 months have totaled 206,000 units.

Don Ake, Vice President of Commercial Vehicles at FTR, comments, “There is nothing unusual about the order numbers in August. We expected orders to average around 12,000 per month in the July-August period and taken as a whole, they did. There were less cancellations in August, making the month look a little better than July. July will be the lowest order month of the year, which is typical. Market conditions did not deteriorate nor improve in August.

“Fleets are now busy evaluating their truck requirements for 2017 in an uncertain freight environment. September orders should remain moderate, with October orders giving the first indication of expected market conditions for next year.”