Fact.MR's new study anticipates the articulated hauler market will grow at over 5% CAGR through 2028. 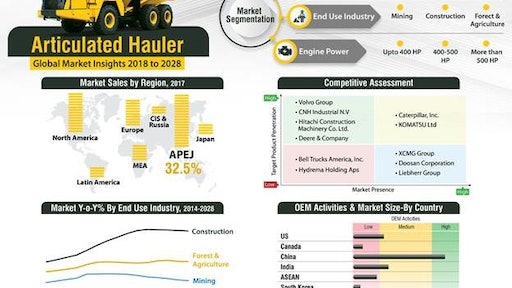 A new Fact.MR study indicates the articulated hauler market will register volume sales of over 16,400 units in 2018. The market is likely to grow at over 5% CAGR through 2028.

The study shows that perennial demand for articulated hauler in the construction industry underpins the steady growth of the market. In a bid to efficiently address demand from the end-user industries and increase the stabilizing sales through the dealer network, manufacturers will consistently introduce new B2C business approaches that deliver better service offerings to customers.

The study estimates that the APEJ region will cross 6,400 units of volume sales in 2018, an excess of 400 units reported in 2017. Increasing number of construction projects and growing government support in the region can be attributed to the highest demand in the APEJ.

North America is expected to follow the trail and account for almost 20% of the global volume sales in 2018. Increasing construction projects in the residential sector have significantly contributed to over 80% of North America’s demand for articulated haulers in the United States.

The mining industry is estimated to register the second largest demand and account for volume sales of over 4,600 units in 2018. The study shows that mines with the large surface area and big quarries prefer rigid haulers over articulated haulers.

The articulated hauler market remains moderately consolidated and Fact.MR finds that Tier 1 companies hold 60-65% of the revenue share of the market in 2018. Prominent market players are engaged in expansion to strengthen the regional presence and heavy investment in R&D aimed at novel product introduction.

Increasing demand for compact-sized equipment continues to rise in the construction projects. With the growing reliance on temporary works in the modern construction projects, compact or mid-sized articulated haulers are highly sought after as they deliver easier transportation and greater maneuverability on site.