A new report from Hexa Research finds the skid steer loader market with achieve a CAGR of 3.3% from 2017-2025 due in part to growing importance for the machines within the landscaping market. 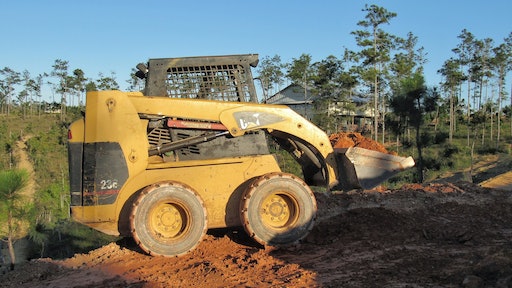 The global skid steer loader market size is projected to reach USD 3.16 billion by 2025 and exhibit a CAGR of 3.3% from 2017 2025. This can be attributed to growing importance of and need for landscaping applications, which has compelled manufacturers to develop and launch various attachments such as brush cutters, mulchers, heavy-duty mowers, and forestry units.

Wheeled skid steer loaders led the market in 2017 and accounted for a share of 65.3% in the overall revenue. The segment is expected to maintain its dominance over the forecast period owing to its high visibility and penetration, widespread usage in hard and rough surfaces such as concrete and lawns, and growing preference for the product to carry out speedy work.

In 2017, the construction sector held a 51.5% share in the overall revenue. Loaders are gaining significant traction in the construction industry owing to their compact design, new attachments, and improved load carrying capacity. In addition, these products are used for cleaning dirt, loading and unloading of construction materials, and maintaining and grading of land.

Increased spending on infrastructure development in countries such as China, India, and Bangladesh has created novel growth opportunities for skid steer loaders. For instance, China's construction sector generated approximately USD 802 billion in 2017, compared to USD 715 billion in 2016. Investment has largely been directed toward development of roads, bridges, and rail infrastructure.

Landscape and ground maintenance is a leading application in the market. It is expected to exhibit a CAGR of 3.6% from 2017-2025 owing to increased spending on maintenance of lawns and garden in developed countries and presence of many Mom-and-Pop companies, which utilize skid steer loaders for maintaining lawns and gardens.

Asia Pacific dominated the skid steer loader market and accounted for 50.5% share in the overall revenue in 2017. The region is expected to expand at a CAGR of 3.6% from 2017-2025 owing to rise in spending on infrastructure development, including sport complexes, stadiums, railways, roadways, and buildings in emerging countries such as China and India. Furthermore, positive outlook of the dairy farming sector and need to enhance cattle yield, especially in India, is expected to open new avenues for the market.

Manufacturers are focusing on developing fuel efficient products and new attachments in order to increase usage of skid steer loaders in various applications such as agriculture, logistics, and forestry. Moreover, companies such as Bobcat, New Holland, and Komatsu are spending on developing advanced cabin with features, such as enhanced displays, air and head controlled systems, sound proof protection systems, and joysticks.