A Manitowoc 16000 was recently used to help build a seawall on Prince Edward Island due to the large crane's ability to work on land. 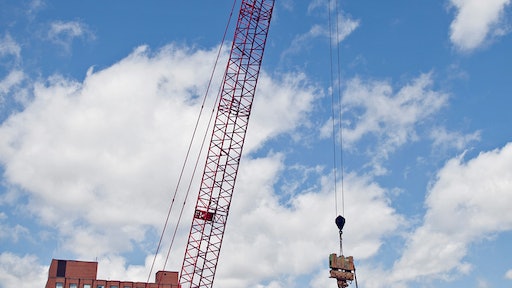 The 16000, owned and operated by Irving Equipment, the pile-driving subcontractor, was initially used to drive sheet piling that forms the base of the seawall. While typical pile driving in marine applications might require a barge-mounted crane, the size and capacity of the 16000 allow it to work on land, operating at radii of between 125 ft and 180 ft.

“Even though the 16000 has higher rental rates than typical cranes used in pile driving, it is often a very competitive choice for customers in marine applications,” Murty says. “There are definite savings in not mobilizing barges. Plus, it is easier to access materials from land.”

For the pile driving, the crane worked with 247 ft of main boom, a wind tip attachment and a vibratory-hammer to drive the piles. The wind tip provides greater offset and keeps the hammer and sheet pile away from the boom during installation.

With the installation of sheet piling complete, the 16000 helped another subcontractor install whalers, the cross beams that support the seawall. For this work, the crane again worked at radii of between 125 ft and 180 ft. The crane arrived on site in late May and will stay on the project until mid-August.

Irving Equipment purchased the 16000 used on this project from Shawmut Equipment, a Manitowoc dealer based in New England, U.S., which also has a branch in Canada.