Manitowoc's new Product Verification Center will be used to rigorously test and scrutinize the components that go into its cranes. 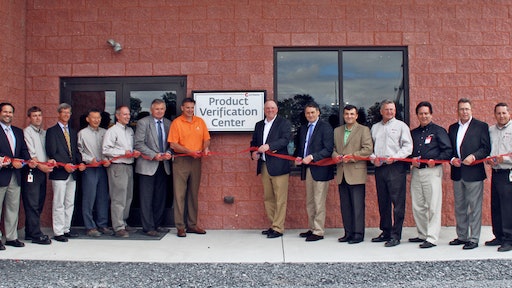 A crane can only be as good as the sum of its parts. That’s why Manitowoc Cranes has built a multimillion dollar, state-of-the-art testing facility to rigorously scrutinize the components that go into its cranes.

The Product Verification Center at Manitowoc’s Shady Grove, PA, facility in the U.S. will help produce stronger, more-reliable cranes. By allowing rigorous testing of component performance and working life cycles, it will give Manitowoc engineers new insight into the anticipated performance of cranes in the field. It will also speed up the product development phase for new designs, reduce warranty claims and on-site stoppages, and allow for the direct comparison of supplier components.

“For Manitowoc and its customers, this new center marks the beginning of an exciting phase in modern crane design and testing,” he says. “By meticulously inspecting the quality and endurance of individual components, we will be able to reach new, unprecedented levels of quality. We believe there’s no other facility like this in the crane industry.”

The center features a number of technologies that will deliver detailed pictures of anticipated component performance. Among the most significant are:

The Product Verification Center will test designs earlier in the product development process than was previously possible. That means suppliers and their components can be vetted before the products are placed in cranes. Also, the head start allows Manitowoc engineers to discover any potential difficulties at an earlier stage and devise solutions long before equipment reaches job sites.

“It’s still very early, but we’re already seeing some interesting results. For example, we recently used thermal imaging technology when analyzing engine performance on one of our industrial cranes. As a result, we adjusted the design to increase fuel economy and improve productivity,” he says. “In the future, we will be able to replicate this kind of innovation on a much bigger scale.”

Alan Calta, director of the Product Verification Center, leads a specially-trained staff of 41 managers, technicians and engineers. The team has fashioned a proprietary verification management system to organize, prioritize, summarize, compare and archive the center’s test results. Additionally, Manitowoc’s experts will be able to develop competitive standards for verification and processes in the future.

The new facility allows for the testing of entire cranes, too. Engineers are able to view cranes being tested on one of the center’s six test pads, for example, and monitor the results in real time. The center’s roof is tall enough to allow for the full extension of crane booms, so engineers can accurately re-create jobsite conditions.

The Product Verification Center took less than a year to build with an aggressive schedule and major push by key individuals from Manitowoc’s plant operations, engineering and purchasing teams. The biggest challenge was recruiting talent for a team that could meet the heavy demands of the product verification requirements.

Manitowoc started researching and planning for the center in 2009 as part of its commitment to continuous quality improvement. The company discovered that many of its suppliers weren’t able to test their own products and when they did, the measurements were often incomplete. Driven by the desire to understand as much as possible about each component that goes into a Manitowoc crane, the company decided it should create its own verification facility.