A Grove GMK5220 all-terrain crane is helping to build Brazil's first monorail as part of the country's infrastructure investment. 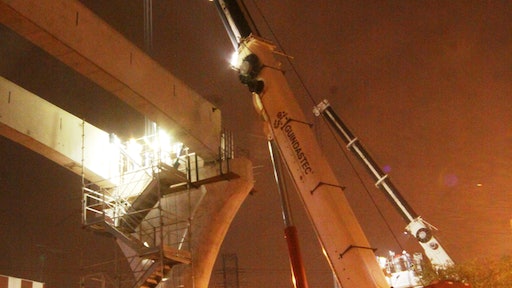 It’s a massive project: the construction of a new monorail transportation network in Brazil. Before the first train can run, the first tracks must be laid. São Paulo-based lifting and logistics company Guindastec is laying the track, lifting and placing some 2,000 track beams on the ground. A Grove GMK5220 all-terrain crane is at the center of that action, laying the 70 ton track beams across the project site.

“We needed a crane that had a very high lifting capacity, but could still be moved easily as the foundation of the tracks progressed,” Rocha says. “We already have five other Grove all-terrain cranes and use them on infrastructure projects across Brazil, so we were confident in our decision that the GMK5220 is the best crane for the job.”

The GMK5220 boasts a 220 ton lifting capacity and a 68 meter seven-section boom. Using inserts and a swingaway can further increase the tip height to 108 meters. The boom’s Twin-Lock pinning and Megaform design make it more rigid, allowing it to lift heavier loads. A fully automatic Allison transmission and five-axle, independent Megatrak suspension ensure the crane can handle the most rugged jobsites.

The first of three monorail lines is a 26 km connection from Villa Prudente to Cidade Tiradentes. In the first phase, which was scheduled to finish in September 2012, the GMK5220 will lay 400 concrete track beams. In phase two, which will end at the close of 2013, the crane will lay approximately 1,600 more beams.

The monorail system will need so many cars that the country is building its own factory to fulfill the demand. When finished, some 48,000 people will travel on the monorail each hour. That’s approximately 1,000 people per train.

Guindastec has been in the crane operation and rental market since 1979. Rocha says it was the first company in Brazil to use all-terrain cranes. The company has worked at several major job sites in Brazil including the 2016 Olympic stadium in Rio de Janeiro. The company even visited Las Vegas, NV, in the U.S., to study monorail systems while bidding on the job.

Rocha says the visibility of a national project, especially one that involves new technology, demands quality work and quality tools.

“The monorail project is very high-profile for both Guindastec and the country of Brazil,” Rocha says. “We can’t afford to have any downtime. As we already have first-hand knowledge of the high quality of Grove cranes and the support provided by Manitowoc Crane Care, we know the cranes will be up to the task.”