John Deere announces it will be a Legacy Sponsor for the Great American Wheat Harvest, a documentary film designed help connect consumers with the people who produce their food. 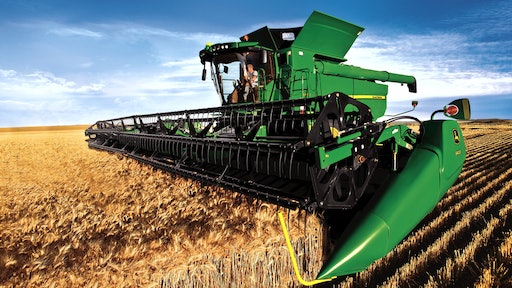 John Deere recently announced that they will be a Legacy Sponsor for the Great American Wheat Harvest documentary film being produced by Maryland-based filmmaker, Conrad Weaver of ConjoStudios, LLC. In an effort to help better connect consumers to those who produce their food, the film encapsulates the stories of North America’s wheat growers and custom harvesters.

“We want to thank and honor those farmers whose mission it is to provide healthy and nutritious food to a growing world population,” says Nelson. “We recognize the value of supporting a documentary film like the Great American Wheat Harvest to further open the dialogue between producer and consumer and to demonstrate how we bring food from the field to the market.”

“It speaks highly of the commitment and foresight of a company like John Deere to help us capture, preserve and showcase the cultural heritage that has shaped our way of life,” says Conrad Weaver. “A production of this magnitude only becomes reality with the support of those visionary leaders, like John Deere, to see it through to the end.”

Weaver acknowledges the many milestones and innovations made by John Deere that have helped farmers and harvesters become even more productive in what they do.

“The folks at John Deere are the hard-working, pioneering, kind of people who we are featuring in our film. We’re thrilled that they have joined us in telling the Great American Wheat Harvest story,” he says.

In addition, Nelson says that through their extensive dealer network, John Deere provides innovative farm machinery, technology and services to help producers gain even more efficiency in their farm operations.

Weaver recently worked with Miss America 2011 Teresa Scanlan, who endorsed and supported the project by filming a public service announcement to help recruit interest in sponsorship. The film’s trailer recently received international recognition when it won the 2012 Silver Award at the 33rd Annual Telly Awards competition.