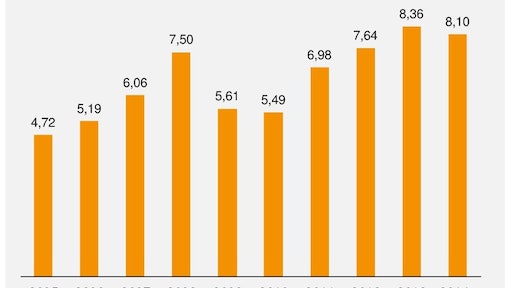 The agricultural machinery industry has achieved a new record turnover in Germany in 2013. The VDMA Agricultural Machinery Association presented the annual results for Germany in 2013: Sales increased by 9% to 8.36 billion euros. "Seen in the global context, the dynamics of the production site Germany confirms its top position," commented Dr. Hermann Garbers, Chairman of the VDMA Agricultural Machinery Association. According to preliminary calculation of the VDMA, the agricultural machinery industry grew worldwide by 7% in 2013, whereas only by nearly 5% in Europe.

The VDMA members achieved almost half of the turnover by production of tractors. Production disproportionately grew by 16% to 4.13 billion euros. With a production volume of 63.600 units, the second highest value over the past 20 years has been reached. The German plants particularly specialized on high-performance tractors: two-thirds of the tractors made in Germany are now equipped with an engine power of more than 90 kW (120 HP).

About 14,000 tractors were intended for the German market; this is equivalent to about 38% of new registrations. Nearly 50,000 units were exported. France, again, is by far the most important foreign market. In the past year, tractor sales with the French traders increased by one third to around 700 million euros, followed by the United States with an export volume for tractors of approximately 380 million euro.

Apart from the strong demand in Germany, the strength of France and the United States gave the deciding growth impulse for the entire German agricultural machinery industry.

The manufacturers of tillage equipment also increased their sales by 16%. Here, too, the export growth was higher than the domestic business. The production of crop protection equipment grew by remarkable 24%. For the other product lines mainly reached growth rates in the mid-single digit percentage range.

Backlogs for the German factories are currently just below the previous year's level. Weaker trends for 2014 are likely to occur in France and in the United States. The conditions on the Russian market remain difficult for the German manufacturers, whereas other markets, such as UK and Spain recover significantly. The German market, in which the VDMA members still generate more than a quarter of their turnover, will probably hold its sales volume amounting to five and a half billion euros in 2014.

According to the last VDMA survey within the framework of the agricultural investment barometer, the investment plans of the German farmers and contractors remain at a high level. Given these regionally differentiated prospects, the VDMA Agricultural Machinery Association anticipates a slight decline in sales for 2014 by 3% to 8.1 billion euros. Following the record result of the past year, this would be the second highest revenue ever for the industry.

Epiroc customer Newcrest Mining has expanded the number of automated mining machines operating in its fleet.
Epiroc
November 12, 2020
Follow Us