The Psychology of the Human Interface

Cab controls are taking operator intuition into consideration for design and layout in order to improve overall productivity and safety. 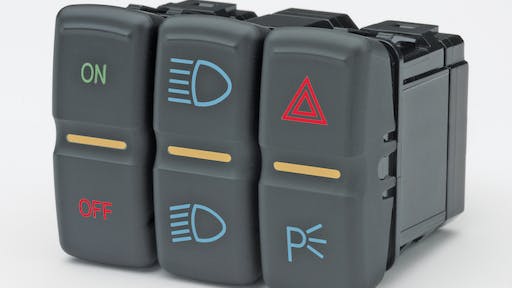 The latest generation of Eaton's electronic switch module uses a multiplexed communication system. In addition to reducing the complexity and cost of harness wires, the technology improves reliability while lowering system costs and installation time. Since the system requires fewer wires per switch than traditional electro-mechanical switches, the overall weight of the vehicle is reduced as well.

Technology is advancing at a considerably rapid pace—but, should it? Electronic system features are inundating equipment operators as manufacturers continue to enhance and advance their equipment. How many are asking if the latest gadget or program is really necessary? As technology gets more complicated and the number of skilled operators continues to decline, electronic control system manufacturers must now consider not only the look and feel of a system, but delve into the mind of the operator to establish design and functionality.

Transparency has become the new “hot button” term used to demonstrate easy-to-use complexity. As electronics become more sophisticated, transparency alleviates the need for the operator to be an expert, and instead focuses on designing an intuitive control panel that a novice machine operator could comprehend in a short period of time.

“Testing the interface between the operator and the technology proves they don’t need to know how the technology works, but they do need to have enough information to operate the machine effectively,” says Lisa Steiner, Team Leader for the National Institute for Occupational Safety and Health’s (NIOSH) new Cognitive Engineering team.

The human interface is critical to production; and as obvious a statement as that seems, it only reinforces how essential cognitive engineering is to control development.

“To a large extent, the change from electro-mechanical to electronic controls is occurring to improve efficiency, reliability and machine uptime,” explains Sara Hazen, product line manager at Eaton Corp. “Electronic controls reduce warranty issues, as there is less wiring required and fewer connection points and possible points of failure.”

Grayhill Inc., La Grange, IL, has been trending toward intuitive user interfaces. “There is a distinct core being built around understanding, studying and figuring out a way to assign metrics to certain aspects of intuitive user interface, and then applying them to the design,” says Jonathan Eziquiel-Shriro, Senior Concept Designer—Human Factors, Grayhill.

Grayhill’s a-ha moment came during a project with Audi to design luxury automobile controls. The knowledge the company gained from the project spurred other operator interface products with companies such as John Deere. “All of a sudden a light bulb went off,” says Eziquiel-Shriro. “This is not just something luxury car users are looking for, but rather a measure of intuition and feel, intuition and location, intuition and design, that can be applied to almost any industry.”

There has been greater attention paid to the force travel of controls and how an operator expects it to feel, as well as location and cluster placement. Ergonomics is only one side to control feel and placement; now functional groupings are being considered to keep engine engaging controls close together, for example. “We’re trying to consider where the operator’s hand is going to fall after engaging the clutch, for example, and place a button for changing engine speed close to that,” says Eziquiel-Shriro. “We’re starting to measure the likelihood of an operator correctly selecting a button, so we’re developing new metrics based on operator intuition. We’re not making an intuitive guess; we’re taking a mathematical study of the number of times operators push certain clusters or joysticks.”

For Eaton’s customers, Hazen says “off-highway customers are typically looking for the same type of interface that operators are accustomed to – like rockers and joystick controls. Customers are less interested in changing the type of interface than the technology below the panel. Ultimately, customers are looking for controls that look good—like a luxury car—while operating like a bulldozer especially in heavy-duty trucking, and even in off-highway applications.”

NIOSH’s Cognitive Engineering team has labeled two different types of operator errors—selection errors and directional errors. If, for example, an operator wanted a boom to lift up, he could either pick the wrong lever, or picked the correct lever but moved it in the wrong direction to perform the desired action.

Either operator error can result in machine damage or human injury or death. NIOSH is hoping to determine what the assumed action is of a certain control by the operator.

In a preliminary survey conducted by NIOSH to underground mine roof bolter operators, about 80% of operators claimed that if after maintenance the control hoses were wrong, they would make the mechanic fix the problem. However, there are others who mentioned they would try to get used to the new control configuration, a dangerous decision.

Australia’s Industry and Investment NSW (New South Wales) – Mine Safety group issued control standards noted in the MDG 35 series of guidelines which deal with the risks associated with the use of drilling and bolting plant in mines. Within the guidelines, it suggests that controls for roof bolters should use three distinct shapes to differentiate control functions. What Steiner found was that most roof bolter operators never look at the controls, and when investigated and tested, the findings proved that control shape coding did not significantly reduce error rates.

An unfortunate fatal operator error spurred a “Pavlov-type” project utilizing indicator lights to assure an operator of what action will occur with a specific control movement. The motivating incident refers to a shuttle car driver who accidentally pinned another worker against a mine rib. The man was still alive and breathing, and in the mean time another man ran toward the shuttle car to help, telling the driver to turn the steering wheel to the right, crushing and killing the worker. The error came from the helper’s perspective looking at the shuttle car. A shuttle car operator will be on one side of the steering wheel when coming into a mine section, but then flips to the other side of the steering wheel to see his way out.

The “Pavlov” experiment would allow a brief pause prior to an action being performed along with a light (color or location can be used to denote certain actions) to indicate the correct or incorrect control choice. “If you only have one shot to make the right decision with a lever, I think most operators would prefer to know if the action was correct based on a light or other indicator that can mean the difference between life and death,” says Steiner.

“We’re measuring brain activity and tracking eye movements, a lot for operator fatigue, but also in relation to control indicator reaction and its affect on an operator.”

“Sometimes engineers have a hard time simplifying a concept. What information is being provided? Is it a warning, an indicator or just information? How is this information going to be best presented? A graphic, a light or a number?” asks Steiner. NIOSH’s Cognitive Engineering group aims to answer these questions and find what the best way to give an operator information and how much information a person can handle at a time.

The industry (and society overall) is quickly becoming inundated with information that is irrelevant for the matter at hand. The operator should not have to sift through useless data and information in order to make a fast and informed decision in the event of an emergency situation, and even beyond emergencies just to simplify the amount of time it takes an operator to make a decision to increase his productivity.

Eziquiel-Shriro feels Grayhill’s rubber keypads are one of the easier interfaces to learn for equipment operators. “The functions on the keypads, if they are logically labeled with standard icons on a generously sized surface comfortably within the operator’s line of sight, would be thought to be vastly superior to a bunch of unlabeled colored switches and joysticks.”

A new operator would perhaps become more easily accustomed to icon identification than intuitive joystick movement, though each operator is different with different skill sets, learning styles and comprehension levels. Eaton’s Hazen has indicated that the company is currently considering designing controls based on video games to create an easier-to-learn interface for new operators.

Icon-based interfaces such as smart phone and tablet apps also are considered during interface design, knowing the user’s expectations and abilities are strongly influenced by consumer technology.  “We’re trying to forecast as much as we’re responding to customer demands and requests,” says Eziquiel-Shriro. Grayhill executives have created a Design Center to bring future techs and customers together in a think-tank environment. “Hopefully it will inspire different conversations between OEMs, researchers and Grayhill employees to predict, accurately respond and prepare for what is coming next,” he says.

At the end of the day, understanding the operator on a deeper level does more than simply help with design and layout of control panels. The ultimate goal is to shorten the time it takes for an operator to react and engage the equipment to perform a function. The more comprehensive and easy-to-learn, easy-to-use an interface can be, the more productive an operator, his machine and a company can be. 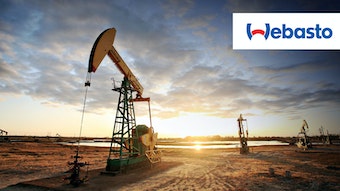 The RadialSHIELD HEPA filter is capable of arresting microscopic dust and providing an additional layer of air quality protection against nanoparticles and viruses.
Sy-Klone International
June 8, 2021
Follow Us