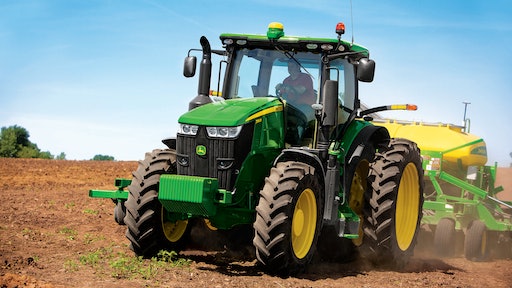 It is said that the world population will grow from 7 to 9 billion people by 2050, which will place increasing food production demands on farmers across the globe. During his presentation at the recent 2013 John Deere Product Launch, Dr. John Fulton, Associate Professor and Extension Specialist at Auburn University, stated that farmers using integrated solutions will be the most successful, and that the 2012 GAP Report—an analysis by Global Harvest Initiative of future populations and food needs—noted technology will have the greatest impact on meeting food production demand.

Dr. Fulton’s work at Auburn University focuses on the use of precision technology and how it can aid productivity on the farm. Visit the university’s website to learn more about Dr. Fulton and his colleagues’ work with precision farming technology.

With technology playing such an important role in farmers’ productivity, agricultural OEMs are continually developing solutions that will enable their customers to get more work done, and in a faster, more efficient manner. Through advancements such as wireless data transfer capabilities—which John Deere introduced at its product launch event—farmers can more easily transmit data between the office and the field.

Wireless data transfer allows farmers to send information to and from their equipment via “the cloud” so they can access it from their office computer or mobile devices and eliminate the need to carry a device in order to transfer the information. John Deere worked internally as well as with third-party service providers to expand the amount of information farmers can send to and from their equipment. Even if farmers have a mixed fleet, they will still be able to send and receive data due to these third-party service provider relationships. As Kathy Michael, Product Manager, John Deere Intelligent Solutions Group, explained it, John Deere is like the smartphone manufacturer who provides the phone and its basic functionalities while the third-party service providers are the app developers which further enhance the phone’s experience and functionality.

An improved overall operator experience—through both comfort and operational enhancements—was a large focus of the new equipment introduced at the event as how an operator interacts with a piece of equipment plays an integral role in productivity. On both the 7R and 8R Series tractors, the company is introducing its CommandView III Cab. Within the cab is a seat with active suspension to reduce vibrations and the capability to swivel 40 degrees for improved visibility to the side and behind the machine. To help reduce noise levels within the cab, the front window is made with laminated glass, which almost completely drowns out the noise of the engine as I found while test driving a 7R tractor at the event.

Also included in the cab is the fourth generation of John Deere’s CommandCenter display, which was designed to simplify the machine operating experience as much as possible so that operators of any skill level or age will be able to easily use the equipment. The touchscreen display is similar to that of an iPad or smartphone, featuring a combination of text and symbols (in the same manner as apps appear on a tablet or other smart device) which operators can select to activate various machine functions. In addition, as an operator is setting up a specific function of the machine—such as setting tracks—the display will provide onscreen prompts to inform the operator of the individual steps necessary to carry out the function. As each new step appears on the screen, it is also highlighted to further draw the operator’s attention and let him know there is another step to complete before the operation can begin.

Available in two versions, the 4600 CommandCenter is a 10 in. display with four video inputs that enable up to four cameras to be hooked up to the display while the 4100 version has a 7 in. screen and one video input.

For overall equipment productivity and efficiency, John Deere introduced its e23 Power Shift transmission, which will be available on the 7R Series tractors. The transmission features 23 forward gears evenly spaced 15% apart to provide smooth, seamless shifting between gears for improved ride quality. Eleven reverse gears on the transmission are spaced roughly 30% apart to provide equilateral changes in terms of speed when the vehicle is in reverse. Evenly spacing the gears in this manner enabled John Deere to design an automatic transmission which maintains the efficiencies of a mechanical transmission.

Similar to the company’s infinitely variable transmission (IVT), the e23 will include three modes:

Internal testing by John Deere of the e23 has shown a 4% overall decrease in total fluid consumption compared to the IVT when used in conjunction with the company’s Tier 4 Final engines. Along with the 7R Series tractors, the e23 will also be available in the new 8R Series tractors beginning in 2015.

Read about more products launched at the event:

New S Series combines now available with the option to have 36 in. tracks for increased flotation and reduced soil compaction.