The multifunctional armrest is an operating system that can be adapted to different operating scenarios. 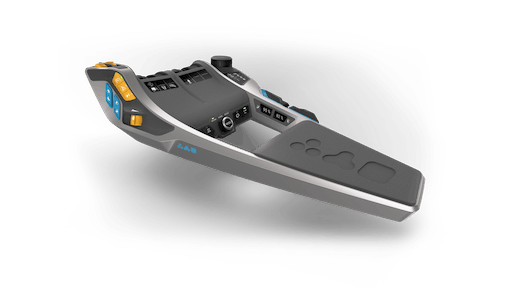 In a 3-​year research project called aISA (adaptive interface systems in agricultural tractors), elobau, together with the University of Hohenheim and the University of Stuttgart, researched and developed an operating system for tractors that can be adapted to different operating scenarios.

Considered to be a universal machine, the tractor is primarily used in agriculture, and also forestry, construction and the municipal sector. It has gained its reputation as a universal work machine from its interface equipment for pulling, driving and picking up attachments and implements.

As there is such a wide variety of work equipment available, each interface is capable of being used differently to suit each application. In particular, the hydraulic and PTO interfaces serve a wide functional range. However, current tractor operating systems do not accurately replicate this functionality either in an expectation or movement compatible manner. Not being functionally accurate results in the PTO always being engaged or disengaged, rather than the baler or mower being engaged or disengaged. Or, that instead of tilting the tipping bucket or the pickup up or down, the extension and retraction of a hydraulic cylinder is always operated. Consequently, and particularly in hydraulics, the assignment of control valve operating elements to functions on the attachment is not always obvious. DIN EN ISO 9241-110 Principles of dialogue design says about task adequacy:

An interactive system is task-​appropriate if it supports the user in completing his or her work task, i.e. if functionality and dialogue are based on the characteristic properties of the work task rather than on the technology used to complete the task.

Not being in line with user expectations means, a constant hydraulic flow, such as the blower fan of a pneumatic seed drill, is switched on or off with a flat tilt lever instead of a button. Movement incompatibility is where a user moves the support leg of a trailer upwards by moving the associated control element, for example, a proportional flat tilt lever downwards, and vice versa.  DIN EN 894-1 Safety of Machinery says about expectation conformity:

Population stereotypes and other user expectations about how the human-​machine interface works strongly influence the user in the way he or she uses a particular actuator or display. Users are expected to fall back into population stereotypes in stressful situations even if they would have to act in the opposite way according to their training.

Movement compatibility is within the scope of this definition as it is an intuitively expected that a control element will move in the same direction as the functional element.