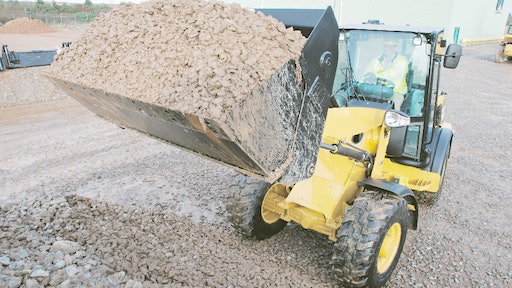 The 906H2 and 907H2 models benefit from improved torque rise and peak torque resulting in faster response to operator demand. In addition, the engine layout has been rotated 180 degrees providing easy ground level access for all regular service and maintenance points.

It is also easier to connect attachments to the H2 Series loaders when fitted with a Skid Steer loader style quick coupling with High Flow hydraulics. The number of connections on the loader arms has been reduced from seven to an industry-standard three connections, in line with Cat Skid Steer loader strategy. Each connector is self-venting, making it easier for the operator to make the hydraulic connection when changing work tools, and by having fewer connections, there is less danger of damage when digging and loading.

The 906H2, 907H2 and 908H2 provide a comprehensive range of compact loaders to suit a wide range of applications and working environments. With bucket operating capacities from 0.9-1.1 m3 (1.18-1.4 yd3), the three loaders deliver Caterpillar’s legendary wheel loader performance in a compact, maneuverable package.