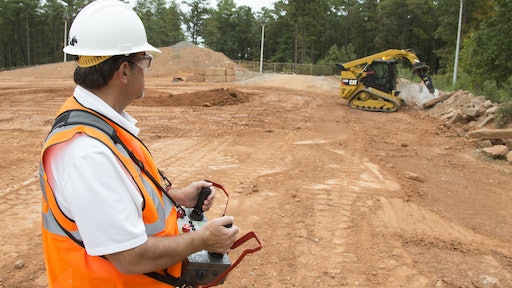 TORC Robotics and Caterpillar announce the availability of the RemoteTask remote control system for Cat D Series Skid Steer, Multi Terrain and Compact Track Loaders. The RemoteTask system enables operators to precisely control the machines from outside the cab—as far away as 1,000 ft. (300 m) and at a safe distance from potentially hazardous tasks and environments.

“Providing customers a solution to remove the operator from harm’s way while operating Cat compact loaders in certain applications further supports Caterpillar’s commitment to safety,” states Jeff Griffith, Sr. Market Professional for Caterpillar. “TORC Robotics and Caterpillar have teamed up on the development of this solution for SSLs, MTLs and CTLs and have an exclusive marketing agreement to distribute and support RemoteTask through Cat dealers.”

The RemoteTask controls feature virtually no lag in machine response time. With RemoteTask, the remote operator’s performance is as fast and smooth as in-cab operation. The intuitive remote control interface is designed to closely mimic in-cab machine controls, creating an easy operator transition from manual to remote operation.

“When I use the RemoteTask controller, the machine response is instantaneous,” says Bob Shoop, Product Demonstrator/Instructor for Caterpillar. “The feel and response mirrors the operator controls of the machine itself. Remote controls I’ve tested previously often had a delayed response.”

Transforming a machine is simple. It only takes about an hour for a Cat dealer to install the RemoteTask system. With the system installed, the machine can transition from manual to remote mode at the turn of a key switch. The system is completely transferrable between units.

The portable yet durable console allows the operator to move as needed for good lines of sight. RemoteTask can be integrated into 16 models of Cat D Series Skid Steer, Multi Terrain and Compact Track Loaders and can control more than 200 work tools with all hydraulic functions controlled via the remote system.

The RemoteTask remote control system will be available for purchase in North America in January 2016, followed with availability outside of North America later in the year.