Kubota gave a first look at the next generation of its flagship CTL. This is the new SVL75-3, a revamped compact track loader with more power, more comfort, more...everything. 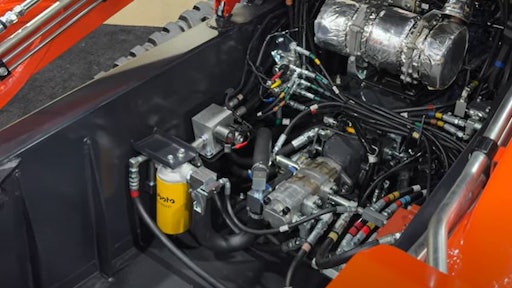 The new SVL75-3 is a compact track loader that Kubota says will make fans of this extremely popular machine very happy.

We’re going to get to performance in a bit—there’s a new engine and hydraulic system to discuss—but for the most part, Kubota’s focus with this new generation of SVL75 was improving operator comfort. So the cab is where we’ll start.

With the new one-piece design the whole cab— including the floor pan—now tilts up and out of the way, leaving you with wide open maintenance access. The move to this one-piece design is going to help a great deal with keeping more dirt, dust, and noise out of your working environment.

Kubota has also improved heating and cooling performance of its climate control system.

One further benefit of the new design is more foot room. There’s about 2 inches or so more in this new Dash-3 cab over the Dash-2 model.

As you’d expect, access to the cab is extremely easy thanks to Kubota’s wide entrance and sliding front door design. Beyond entry and exit, the door can be left open during operation and it can be opened regardless of the position of the bucket or loader arms.

This aspect in particular is a very popular design choice by Kubota, but even so it’s one that the much of the rest of the industry has not implemented due to the fact that a sliding door currently forces manufacturers to place buttons and other controls along the armrests.

However, Kubota isn’t swayed by that argument, and feels that the entry, exit, and visibility conveniences afforded by the door outweigh any ergonomic issues that may arise.

And when you hop in the cab, it’s hard to argue with them. The controls aren’t buried beneath your arms. In fact, everything is within a less than a foot from where your arms sit during operation.

Plus, Kubota has completely overhauled its switches and control layout for this new machine.

At the head of the armrests are a pair of updated joysticks. Kubota has implemented fingertip control of all major functions and attachment operations for the SVL75-3 into these sticks, which also feature backlit switches for easier identification of functions.

One note on the new joysticks, while they are standard on the high-flow models of the SVL75-3, they are a kit option for the standard-flow models.

Along the right side of the cab is the new 7-inch color touch screen, jog dial and switch layout. The new display can be controlled by touch or via the jog dial near the switch layout and keeps alerts and machine operation statuses like fuel level, hydraulic oil temperature, and aux modes at a glance.

The new display also integrates the view for the standard rear view camera, which can be set to display constantly or only when the machine is in reverse.

The display also acts as the interface for the new keyless, push-button start feature. The feature allows you to set up to 51 unique 4-digit passcodes, allowing you to restrict use of the machine to only approved operators while also not having to keep track of keys anymore.

Finally, if you opt for the closed cab model, the new display also includes a radio with Bluetooth connectivity.

Alright let’s dig into power. While the SVL75-3 retains the same 74.3 hp rating of the SVL75-2, overall performance is slightly better on the new machine.

At the heart of this machine is a new engine, an updated version of the turbocharged V3307 that can achieve higher maximum torque than the version found in the SVL75-2.

Kubota has also made improvements to the cooling system on the SVL75-3. During high-load work the SVL75-3 doesn’t require as much fan power to keep the engine cool, allowing that saved power to be used for power-hungry tasks.

The hydraulically-driven fan on the SVL75-3 pulls fresh air in from the top of the cooling package and vents hot air out of the side of the machine. It’s also a smarter variable speed fan. Kubota has designed the fan to turn more slowly in colder weather, allowing for the engine to warm up faster.

An auto-reversing fan is an available option on this machine.