Take air out of the picture

Resilient Technologies developed its non-pneumatic tire to resist punctures in an effort to increase the safety of military personnel. 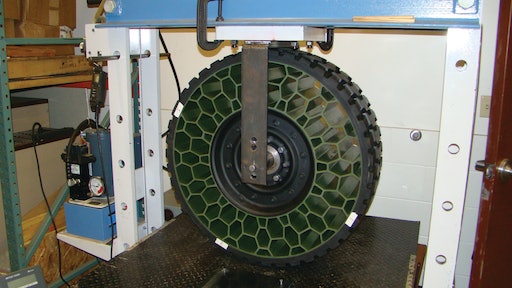 The non-pneumatic tire (NPT) design prevents the possibility of punctures and enables military vehicles to operate in any terrain, allowing soldiers to quickly evacuate from dangerous situations if necessary.

Driving in rough military conditions can be difficult. Making it even more difficult is the chance that a bullet or piece of shrapnel will hit a vehicle’s tire, rendering it immobile. When this happens, soldiers are even more susceptible to danger.

Development of the NPT

Resilient Technologies was approached by the U.S. Military to develop a better tire for its Humvees being used in theater. Ed Hall, Chief Operating Officer at Resilient Technologies, says the military was concerned about its current run-flat options. “Resilient founders were approached to find a wheel tire solution that would provide continuous mobility at top speed in the face of ballistic events,” says Hall.

At the moment, pneumatic tires on military vehicles have a solid donut-like insert, called a run-flat insert, which is supposed to keep the vehicle moving if a tire is hit and loses air. However, according to Hall, the insert generates a lot of heat and can cause the vehicle to lose its balance. “Even if the run-flat insert works optimally,” says Hall, “it is only designed to travel 30 miles at a speed of 30 mph.”

To solve the military’s tire problem, Resilient Technologies developed the NPT. Initial development and simulation work for the tire began in 2006. Hall says the company’s goal was to “get rid of situations where a loss of air pressure could lead to a loss of life. The first thing we did was eliminate air pressure.” After hundreds of potential designs, laboratory and on-vehicle testing, the company achieved the current design featuring a polymeric web, giving the tire a honeycomb-like appearance.

The NPT’s polymeric web enables the tire to perform just like a pneumatic tire. “It provides the characteristics you get from air pressure as well as side walls,” says Hall. Providing the interconnection between the tread band and the rim, the polymeric web keeps the tire structurally sound, while also allowing the tire to conform around obstacles, such as a rock. Hall says this is because the NPT has a top loading tension based design, enabling the tire to buckle and roll easily over objects in the vehicle’s path. Because the NPT is structurally sound, it is also able to carry the vehicle’s weight just like a pneumatic tire.

Benefits of an airless tire

One of the benefits that Resilient Technologies found when testing the NPT design was the tire’s lower rolling resistance. Hall says the tire offers between 27% and 60% lower rolling resistance compared to pneumatic types, which leads to greater fuel efficiency. “[Improved fuel efficiency] was never our primary focus,” says Hall, but it was a positive side benefit. “Our primary focus was just the continuous mobility aspect.”

With the tire’s ability to resist punctures, there is no need to carry a spare tire on the vehicle, which can help reduce vehicle weight. The puncture resistance also reduces maintenance, says Hall. Since the NPT is airless and resists punctures, there’s less of a need to refill or change the tire.

Though the tire was initially developed for military applications, Hall says that eventually the NPT could be put into production for commercial applications. He notes that the tire would fit in any application “where a loss of air pressure either presents a hazard to the rider or maintenance costs or downtime.”