What is wheel caused track damage versus normal wear? 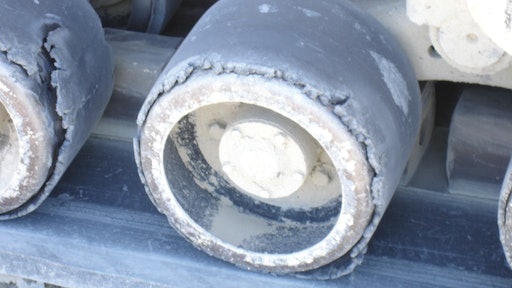 Above the wheels are debonding due to excessive heat. These wheels will completely fail within the next 50 hours.

Superior Tire & Rubber Corp. has been supplying urethane undercarriage wheels to the rubber tracked tractor market since 2002. Beginning in 2008, Superior has been an OEM production supplier of these wheels. Superior’s undercarriage wheels are targeted specifically for heavy-duty applications. Over 20,000 wheels have been supplied with zero warranty. Urethane wheels have proven to not debond and maximize track life and lower operating costs.

What is wheel caused track damage versus normal wear?

Track damage is not minor cosmetic cuts, chipping and splits caused by abrasive debris.  This damage is minor and part of normal wear due to surface conditions.  Tracks with the inside surface damaged and tracks with excessive guide lug damage are not normal wear.  The most common and severe track damage is broken or protruding track cables and heat related damage caused by friction.  Due to excessive heating and cooling over time the rubber material of the track breaks down allowing the cables to pull to the inside of the track.  Also the friction, caused by the friction between the rubber wheel and the track guide lug, on the inner track surface can cause the track to have excessive heat buildup and melt the track rubber.

How do wheels cause track damage?

Loose debris between the track and the wheel over time embeds into the wheel material as the rubber on the wheels becomes fatigued.  Broken or chunked tire material, torn rubber due to debris or track misalignment and bond failure due to heat buildup.  Other damage to the track can occur when a bearing seizes which then in turn causes the wheel to not turn properly.  Typically this will build up excessive heat in the track and cause a failure.  Other causes for wheel damage to the track are insufficient clearance between the wheels and the guide lugs which causes excessive rubbing of the lugs and wheels not matching the guide lug configuration.  This interference causes extreme heat build-up, rubber compound break down and wheel failure.

Due to the high coefficient of friction of the rubber wheels they tend to build up heat during operation and the longer the run time of the tractor the longer they run at this elevated heat.  This often happens when roading the tractor.  Over time the rubber weakens due to the heating up and cooling down process.  Once the rubber weakens it loses what cut and tear resistance it has and becomes susceptible to debris such as gravel getting stuck to the wheels which in turn scores the inner track surface.

Also as this heating up and cooling off occurs over time the adhesive bond between the steel wheel and the rubber will give way and fail.  This is typically first evident on the outside edge of the wheels and then comes across to the inside causing a total failure.  If the wheel becomes completely de-bonded and is left on the machine debris will cause the steel to develop flat spots or become sharp causing further track damage.

Due to the low coefficient of friction for urethanes the heat buildup that happens with the rubber wheels does not occur.  The urethane will run much cooler and does not experience the heat and cool cycles like the rubber does and does not break down and weaken.  Due to not weakening the debris issues do not exist.  Also with the lower coefficient of friction the urethane wheels do not cause the track to heat up.

The high cut and tear properties and the lower heat operating environment allows the urethane wheels to wear evenly and to maximize both wheel and track life.

A common scare tactic used by rubber wheel competitors is that with the urethane material being harder it will cause damage to the interior surface of the track. Let’s first look at 20 Rockwell hardness steel.  Steel only wheels will damage tracks for a couple of reasons. The first being that there is no flex between the wheel and track which can cause debris to embed in the track causing both tearing of the track surface and damage to the steel due to trapped debris not allowing the wheel to turn.  The second cause for damage is that over time and duty cycles the steel rusts and that rust damage causes pitting in the steel surface which in turn becomes abrasive and damages the track.

The Xtreme urethane does flex and has a hardness of 90A durometer compared to 72A for the OEM rubber.  The rubber wheels are only 20% softer and urethane has shown no damage to rubber tracks in over three years of intensive side by side testing with the OEM rubber.  In not one test case was the rubber track damaged due to the urethane wheels and in every case the tracks that had the urethane midrollers were either equal or looked better than those running the rubber wheels.

The major cause of track damage is the buildup of excessive heat which initially causes wheel failure which then in turn causes damage to the track.  With Xtreme urethane wheels the need to be constantly checking wheels for damage is eliminated and productivity is increased.

To determine the actual difference in the hardness of the urethane and rubber on the rubber track we performed a finite element analysis and as a comparison also included bare steel.  In illustration 1 you can see that we utilized the load of the wheel and the width of the contact area on the track for this comparison.

From this analysis it is quite clear that the slightly harder urethane wheels have very little effect on the rubber track.

Superior Xtreme wheels have a track record with a major Tractor OEM with over 20,000 wheels shipped in the last three years and many that were used in the initial OEM tests and the warranty rate is 0 percent.  We have been producing Xtreme wheels for the aftermarket since 2003 and due to no bond failures instituted our no bond failure guarantee in 2008 which simply means that if one of our Xtreme wheels ever de-bonds we will replace it.

A competitive advantage stemming from Xtreme Wheel technical excellence is that with our  Xtreme Wheels the major manufacturer was able to increase their track undercarriage warranty from 2,000 to 3,000 hours in Agricultural applications and doubled from 1,000 to 2,000 in Construction applications.  These industry leading wheel warranty values of 2,000 and 4,000 hours exceed by 100% the common track warranty periods of 1,000 and 2,000 hours.

There are currently many Xtreme wheels running in heavy duty applications in the field with over 5,000 hours and they still exhibit no signs of failure.

Current OEM data does not show an estimated worklife for the Xtreme wheels because there have been no failures to date but the number is well past the rubber worklife average of 1,150 hours.

The major causes of interior rubber track damage are as follows;

The major causes of wheel damage are as follows;

With 10+ years experience in supplying urethane wheels to the rubber tracked undercarriage market and with over 20,000 wheels operating in the field we have never seen nor been made aware of any damage caused to rubber tracks by our Xtreme Wheels. The fact is that many of our customer have told us they extend track life by replacing rubber wheels with polyurethane Xtreme Wheels.