Bendix is celebrating the 10th years of participation in the Knorr-Bremse Global Care non-profit organization which aims to improve the lives of disadvantaged people worldwide. 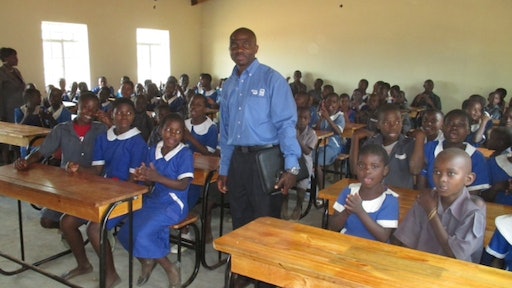 Bendix’s Martin M. M’Tambo recently returned to Kawale Primary School, which he attended as a young boy, to celebrate the completion of a classroom-construction project that he had conceived and directed under the auspices of Knorr-Bremse Global Care.

Bendix Commercial Vehicle Systems LLC is celebrating the 10-year anniversary of Knorr-Bremse Global Care, a non-profit organization founded in 2005 by the Knorr-Bremse Group, of which Bendix is a member. The anniversary marks an important milestone in the company’s commitment to improving the lives of disadvantaged people worldwide and giving them an opportunity to determine their own futures.

At the end of 2014, Bendix marked the completion of its most recent finished project under Global Care, construction of new classrooms for a primary school in Malawi.

Bendix is the North American leader in the development and manufacture of active safety and braking solutions for commercial vehicles. Based in Munich, Germany, Knorr-Bremse is the world’s preeminent manufacturer of braking systems for rail and commercial vehicles.
Knorr-Bremse Global Care exists to give those in need (through no fault of their own) a chance to lead more independent lives. Global Care was formed as a nonprofit in January 2005 to provide rapid, targeted support in the wake of the Southeast Asia tsunami disaster of December 26, 2004. In its first year, the organization made EUR 2 million available to benefit victims devastated by the tsunami. Since its inception, Global Care has implemented more than 140 projects in 42 countries with a total funding of EUR 10.7 million.

“We are honored to be a part of the Knorr-Bremse Group and Knorr-Bremse Global Care,” says Maria Gutierrez, Director of Corporate Responsibility and Sustainability at Bendix. “Social responsibility is not only core to Bendix corporate values but woven into our company culture. It’s difficult, it’s demanding, but it’s also extremely rewarding to those it touches.”

Martin M. M’Tambo, Manager of New Business Development at Bendix, knows firsthand the value that Knorr-Bremse Global Care brings. M’Tambo was born in Zambia but grew up in Malawi, a landlocked country in southeast Africa. As a young boy, he attended primary school in Kawale, a community in the southern outskirts of Lilongwe, the nation’s capital. He had no classroom and no shoes. Instead, he learned each day in the open air under the shade of trees outside. He relentlessly pursued his education. His passion earned him a work visa and a job at Bendix, where he quickly excelled.

In 2013, the same year he earned his green card, M’Tambo visited Malawi and returned to Kawale Primary School, where conditions had worsened. Of the 33 classes within the school, more than half took place outside without desks. Many of the nearly 2,500 students were without shoes.

When he returned to the states, M’Tambo was serendipitously assigned to the same team as Joe McAleese, Bendix President and CEO, at a corporate golf outing. After learning about the terrible conditions at Kawale Primary School, McAleese shared M’Tambo’s story and connected him with Bendix leaders who could help.

M’Tambo was introduced to Gutierrez and Ron Tamunday, advanced manufacturing engineer and the first Bendix employee to complete a Knorr-Bremse Global Care project. With help from Bendix, M’Tambo submitted a highly detailed proposal including blueprints, a budget breakdown, and justification for the project. Knorr-Bremse Global Care contributed EUR 31,000, the cost of four new classrooms.

Malawi’s yo-yoing economy resulted in a 50% cost increase by the time construction was set to begin. M’Tambo found himself importing all building materials due to lack of resources; raising additional funds for a new retainer wall, new glass windows and doors, and other incidentals; and fighting an inflation rate in Malawi that grew from 22% to nearly 29%.

“Costs are extremely time-sensitive in Malawi. They require a lot of creative problem-solving, and you can’t walk. You have to run,” says M’Tambo, who periodically traveled to Malawi to oversee the project on-site. “Planning is easier in the West.”

With all the flux, he could afford to build only two classrooms with the contribution from Knorr-Bremse. He then sought additional funds, hosting golf outings and fundraisers. Bendix stepped in to fund the construction of a third classroom, and M’Tambo’s co-workers contributed as well – one even wrote a $1,000 check after hearing him speak about the program. “The support from Bendix leadership was incredible,” M’Tambo says. “They’re driving a message of corporate responsibility that goes beyond just where you do business. It’s not just global. It hits home for us.”

To ensure success and sustaining support for each project, Knorr-Bremse Global Care requires that each Bendix coordinator works with a local nonprofit affiliated with the project they’re funding. M’Tambo worked closely with Ancient Path, and through their partnership and support from Bendix and Knorr-Bremse, he was able to coordinate what turned into an arduous but enormously rewarding project.

In November, M’Tambo returned to Kawale Primary School to celebrate the completion of the project that he had conceived and directed under the Global Care auspices.

“What we built in Kawale will last hundreds of years after our lifetime. Just thinking about it gives me goose bumps,” M’Tambo says. “This is the biggest and most meaningful thing I feel I’ve ever done.

“I learned so much about management, communication, and leadership throughout this project,” M’Tambo continues. “But I also learned about hope. I told the students, ‘I used to sit there. I used to walk the floor without shoes like you did. But I had a chance, and you do, too.’ They’ve never seen anyone succeed, but I am where I am today because of education. And I hope these classrooms give them that same hope – that it inspires them.”

From Honduras to Haiti

“Completing a Knorr-Bremse Global Care project provides a different sense of accomplishment, a different sense of mission. The opportunity we’re given isn’t just capital – it’s a seed fund,” Tamunday says. “It’s a defined structure that we can build on for years to come.”

In addition to Tamunday’s and M’Tambo’s projects, a member of the Bendix team supervised a EUR 25,000 hygiene-related project at St. Yves Primary School in Limonade, Haiti. Mario Flores, a Program Manager with Global Responsibilities, was immediately identified due to his own current involvement in volunteering activities with Engineers Without Borders in Haiti. Flores conducted site visits to supervise the project to completion.

“It was an incredible experience that I greatly enjoyed and that also reminded me once more of the many opportunities there are to make a positive difference in the world,” Flores says. “The funds from Knorr-Bremse Global Care were very well utilized and will change the lives of many kids at Limonade.”

A $278,000 project at House of Hope in Acuña, Mexico, is also underway to improve the social infrastructure, security, and living conditions for children at a local orphanage. The project represents blended support from Knorr-Bremse Global Care and local funding from the Bendix Acuña manufacturing campus.

“Knorr-Bremse Global Care projects are extremely challenging, but they also offer exceptional opportunities to develop leaders at every level of our company. We are truly inspired by the employees who complete these projects,” Gutierrez says. “When you listen to their passion and to their experiences, you can’t help but cry along with them. We look forward to being part of Global Care’s growing momentum in 2015 and onward.”

The activities under the reach of Knorr-Bremse Global Care are supplemented by efforts at the local and regional level as well. In addition to the opportunity to support projects under the company’s newly updated corporate volunteerism program, Bendix employees throughout North America participate in a wide range of other community service programs, donating their time, talent, and financial support. Efforts include an annual United Way campaign; hunger-relief work; support of Junior Achievement; and fundraising for the National Kidney Foundation, Relay For Life, and other charitable and philanthropic organizations.