Bendix and its parent company recently helped rebuild an orphanage and houses for those affected by a tornado in Acuna, Mexico. 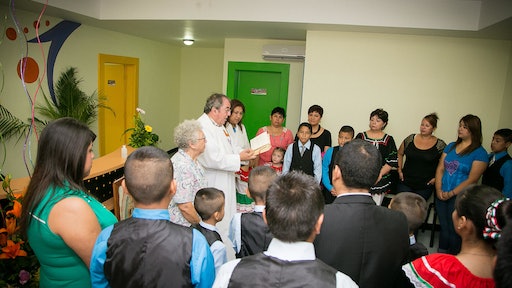 Bendix and Knorr-Bremse Global Care celebrated the opening of a new home for Acuña’s Casa de Esperanza (House of Hope) orphanage on September 16 in Acuña, Mexico.

A pair of community outreach projects to support families and orphaned children in the city of Acuña, Mexico, were made possible through the combined funding and volunteer efforts of Bendix Commercial Vehicle Systems LLC and Knorr-Bremse Global Care. During a September 16 event, Bendix and Knorr-Bremse Global Care celebrated the opening of a new home for Acuña’s Casa de Esperanza (House of Hope) orphanage, and one day earlier announced a plan to provide houses for Acuña families who were displaced by a tornado earlier this year.

Bendix, the North American leader in the development and manufacture of active safety and braking solutions for commercial vehicles, is a member of the Munich, Germany-based Knorr-Bremse Group – the world’s preeminent manufacturer of braking systems for rail and commercial vehicles. Knorr-Bremse Global Care is a nonprofit organization founded in 2005 by the Knorr-Bremse Group to give people in need (through no fault of their own) a chance to lead more independent lives.

Knorr-Bremse Global Care chairperson Julia Thiele-Schürhoff attended the celebratory opening and dedication of Casa de Esperanza. The day before, she also announced the post-tornado rebuilding effort. In attendance at both events were executives and business leaders from Bendix.

“Making a positive difference in the communities we call home is incredibly important, wherever we are,” said Maria Gutierrez, Bendix’s Director of Corporate Responsibility and Sustainability. “These are our neighbors, our friends, our families – in short, our community – and it matters to all of us at Bendix when their lives and neighborhoods are in need. We are very grateful not only to have the support and encouragement of the Knorr-Bremse Group and Knorr-Bremse Global Care, but to have employees who embrace a culture of social responsibility and take every opportunity to get involved in helping others.”

The new 8,073-square-foot Casa de Esperanza (House of Hope) improves the physical infrastructure, security and living conditions for approximately 55 children, replacing an outdated, smaller building that had fallen significantly out of compliance with building codes, lacked security and could not accommodate children with special needs. Bendix and Knorr-Bremse Global Care contributed a combined $278,000 toward the $428,000 construction costs. Another Acuña manufacturer, Gentherm, contributed $150,000.

Construction began in July 2014, and a year later, a team of 50 Bendix volunteers and their families spent a day during a weekend in July 2015 helping paint the building’s interior.

“Bendix and its Acuña employees have regularly sponsored and volunteered support of House of Hope’s activities,” Gutierrez said. “In working with the orphanage, we saw it had good support from a dedicated administration, and we’re pleased to help them address what had become a dire need for a new safe and welcoming home for the children they keep in their care.”

Children moved into the new House of Hope on September 1.

The newly announced home construction project will involve complete construction of houses for local families who lost their homes during a devastating tornado on May 25, 2015. An F4 tornado with winds estimated at above 200 mph tore through the area, destroying or severely damaging approximately 1,000 homes.

Casas por Cristo, a nonprofit that assembles volunteer teams and builds homes for families in need, sought approximately $700,000 to build 100 houses for Acuña families whose homes were not eligible for repair or reconstruction by the Mexican federal government.

Knorr-Bremse Global Care committed EUR 150,000 to the project, which will go toward the construction of 23 homes. Bendix volunteers will donate their time and efforts in the construction of at least four of the new houses. The local government has agreed to donate the land where the homes will be built.

Construction of the homes will commence when the local government finalizes the land donation and has provided a final list of vetted families who lost their homes during the tornado and will not have them reconstructed by Infonavit (a federal government agency). Casas por Cristo expects the project to be completed no later than the close of 2016.

The Bendix Acuña operation has also funded the construction of a community library, infrastructure improvements at nearby schools, and local playground cleanup and installation.

A Commitment to the Global Community

Knorr-Bremse Global Care was formed as a nonprofit in January 2005 to provide rapid, targeted support in the wake of the Southeast Asia tsunami disaster of December 26, 2004. Since its inception, Global Care has implemented more than 140 projects in 42 countries with a total funding of EUR 10.7 million.

The Acuña housing construction will mark the fifth Global Care project supported by Bendix employees since 2013. Others have included construction of classrooms for a school in Malawi, a children’s shelter in Honduras, and a hygiene-related project in Haiti.

Later this month, employees from Bendix’s facilities in Elyria and Acuña will travel to Haiti to deliver new computers and provide training at a pediatric hospital.

Year-round, Bendix employees donate their time, talent, and financial support to a wide range of community service programs. Efforts include an annual United Way campaign; hunger-relief work; Habitat for Humanity builds; support of Junior Achievement; STEM work with elementary and middle schools; and work with other charitable and philanthropic organizations.

Acuña is one of the fastest growing Bendix manufacturing sites, and executives of the Knorr-Bremse Group consider it a model manufacturing facility. Knorr-Bremse honored the Acuña operation as its top-ranked plant in 2011. A long-standing employer of choice in the Acuña area, Bendix employees enjoy a broad range of programs and services including an emphasis on health and wellness, on-site medical and dental services for employees and family members, family-focused activities, employee development training, as well as on-site elementary, middle, and high school educational opportunities.