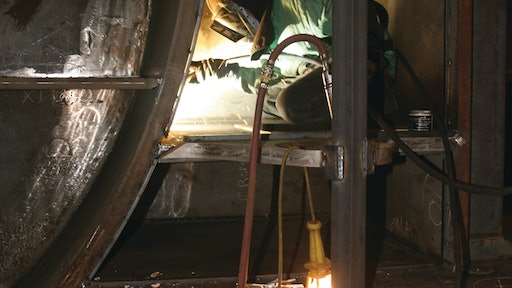 Bucyrus Intl. Inc.'s 8750 walking dragline weighs nearly 15 million lbs. and features a 400-ft. welded-construction boom. It can swing a 120-cu. yd. bucket and move 360,000 lbs of overburden 600 ft. from one point to another and cycle back to do it again within 90 seconds. Another Bucyrus machine, the 495 electric rope shovel, has a working weight of nearly 3 million lbs. and can load a 400-ton haul truck in four 30-second passes. The numbers speak for themselves. This equipment is big, strong and fast.

These technological wonders have been moving the mining industry for over a century and are relied upon to help supply the raw materials that power the world around us. While expertly built and awe-inspiring, the machines are susceptible to harsher wear-and-tear than your average piece of construction equipment. They can rack up millions of dollars in lost production with the slightest shift in availability. Abrasive materials, harsh weather conditions and around-the-clock schedules require Bucyrus to test and improve its manufacturing practices constantly to exceed its customers' reliability demands.

In 1977, Bucyrus wanted to improve on the solid wire filler metal it was using for its welding process and had a need for a special wire formulation to meet metallurgical and mechanical properties that would take its product safely to the most extreme ends of the earth. From the frigid oil sands of winter in Fort McMurray, Alberta, to sweltering summers in Australia, Bucyrus engineers found the formulation in three flux-cored wires from Hobart Brothers' Tri-Mark brand: TM-11, TM-811N2 and TM81N1. Thirty years later Bucyrus has streamlined and improved many of its manufacturing procedures — but these wires are still a cornerstone of the company's welding success. So, too, is the relationship between Bucyrus and Hobart Brothers.

Equipment for all climates

Bucyrus' equipment has played a leading role in some of the world's largest excavation projects dating back to the company's formation in 1880. It supplied the dredges for the enlargement of the New York State Barge Canal (the largest earth-moving project in the U.S. between 1902-'12) and Bucyrus built 77 of the 101 shovels that dug the Panama Canal — there's even a picture of former U.S. president Teddy Roosevelt sitting on a Bucyrus shovel as it works.

The company is responsible for the largest single-bucket earth-moving machine ever built: Big Muskie. Built in 1969, this massive walking dragline stood 22-stories tall and featured a 220-cu. yd. bucket.

As the company grew throughout its first century in business, a shift took place that affected the way Bucyrus built its machines.

"Back in the 1970s we had 70% of our equipment in the U.S. and 30% of it at international sites," says Kent Henschen, director of corporate communications, Bucyrus Intl. Inc. "We're now 70% international and 30% U.S. We've got machines north of the Arctic Circle and at 16,000 ft. in the Andes. We hit the extremes — places where the average person doesn't go, but we have to build equipment that is going to survive."

Two challenges faced Bucyrus as it examined its manufacturing practices during the 1970s (and as it examines them still): one, build a reliable product that works in extreme climates and exceeds the availability requirements of its customers; and two, manufacture the product efficiently to create a base of stock that would help cut down on lead time. To achieve both goals, Bucyrus needed to find a way to fabricate stock metal components using common filler wires that would withstand the brute force of the job and cold temperatures that can turn metal brittle.

Raymond Kowalski, weld-manufacturing engineer, oversees welding operations at Bucyrus' 75-acre facility in South Milwaukee, WI. He was part of the initial group responsible for ushering in improved welding and manufacturing techniques after joining the company in 1964. While many practices and power sources have changed, one thing has stayed constant: the wires formulated by Tri-Mark to meet Bucyrus' specific needs.

The first of the three wires, TM-11, is used extensively on Bucyrus' large draglines. This gas-shielded flux-cored wire is designed for applications where E70T-1 weld properties are acceptable and is preferred for flat and horizontal welds on heavy metals such as the A36 mild steel.

TM-11 was formulated to weld on heavy material and sections to reduce the tendency to crack. There's substantial heat-sink in the heavy materials used by Bucyrus. Hobart Brothers needed a wire that would be ductile when it cools.

Much of the welding is what Kowalski calls "compartment welding" and requires his welders to assume awkward positions within the dragline's welded box structure. Welders wear fresh air helmets to prevent inhalation of the weld fumes and to keep them cool and comfortable. Bucyrus' welders switch to .052-in. TM-811N2 wire when they are required to weld out-of-position. TM-811N2 offers greater arc stability and low spatter when welding vertically and overhead.

TM-811N2 was formulated specifically for Bucyrus and is designed to have high impact values for cold weather applications. This also makes it the choice for out-of-position welds on Bucyrus' shovels. The electric mining shovels are designed to withstand a full range of temperatures that can dip from -100 F in arctic regions to 120 F in desert conditions.

The workhorse wire, however, is the TM-81N1. Also formulated specifically for Bucyrus, it provides the low temperature impact values and high Charpy V-Notch (CVN) values at sub-zero temperatures. It's an easy wire for welders to use and the slag is easy to clean. More importantly, it allows Bucyrus to use, the same wire throughout the equipment regardless of where on the planet it's going. That saves time and money for making wire changes.

"It runs smoother than other wires and has less spatter," says Kowalski. "It creates less smoke. It's operator-friendly, and our welders prefer it over other wires."

While each of the wires is flux-cored, all three require a shielding gas. Matching a flux-cored wire with shielding gas — like the 100% CO2 Bucyrus uses throughout its shop — ensures proper penetration and helps welders remove slag easier. Bucyrus matches the wires with high-amperage power sources like Miller Electric Mfg. Co.'s Deltaweld 652 MIG welder and welding guns (400- and 600-amp) to create strong and durable welds that will survive any harsh weather condition.

"All of the critical welds on our components are ultrasonically tested," claims Kowalski. "We have a number of welds on the dragline that get radiographed. Every weld between structural plate and a casting gets mag-particle inspected. We have our own welding standards that are equal to or stricter than AWS D1.1 code for structural and the D14.3 code for earthmoving and construction equipment. So, we have tight quality acceptance criteria. Bottom line is this: when a customer spends millions of dollars on a machine, he wants it to run and keep on running for a long time to come."

It's undeniable that without such efficient welding processes Bucyrus would be hard-pressed to create the quality equipment its customers demand, especially within the timeframe they require. As it is, the company's shovels (because of the sheer size) take several months to manufacture and a dragline takes upwards of two years to manufacture, ship and assemble onsite.

But there is more to the Bucyrus story than just welding. Theirs is one of commitment — a value that the company extends not only to it customers, but also its employees and vendors.

The welding process on this equipment is demanding, primarily because of the large diameter of wire used, and the stakes are incredibly high in terms of quality. For that reason, Bucyrus has committed itself to maintaining strong training programs for its employees and collaborates with local technical programs to do so. The company also works with its employees to create and implement lean manufacturing practices that will build on the already reliable process used to build Bucyrus' equipment.

The fact that Bucyrus has worked for so long with Hobart Brothers testifies further to the value of loyalty. "When you have a lot of competition out there, and good competition at that, it speaks very highly of not only our products, but more importantly, of the relationship between our companies," says Davis.

Bucyrus' draglines and shovels have helped move the earth for 127 years and some of its machines working in the fields have been in commission for more than 40 years. It's a company that has built a reputation on reliability and longevity.

As welding and mining technologies have advanced steadily, the three Tri-Mark flux-cored wires have remained constant. Newer power sources have made the job easier, but the wires continue to provide metallurgical qualities that haven't resulted in a single warranty claim since being introduced to the welding process.

"I once let a sales rep talk me in to trying another wire," says Kowalski, "and a week later the welders almost hung me. Over the years they got used to that type of wire and as long as a welder is happy and we're providing the reliability our customers demand, we figure we shouldn't mess with it."