A forestry equipment manufacturer continues to evolve its machine design through the use of high-strength steels and other technologies to ensure operator comfort and productivity. 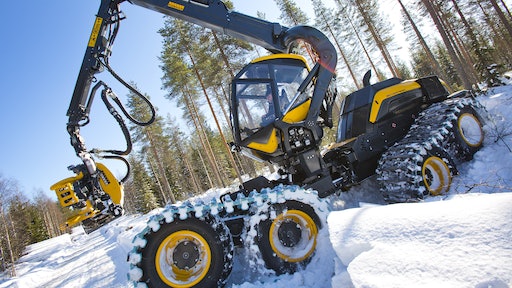 The Finland-based forestry equipment manufacturer Ponsse Plc first introduced its Scorpion harvester in 2013 with the aim of improving operator comfort and productivity. Since then, the company has continued to make further enhancements to the machine, focusing on ergonomics and overall machine performance.

As a means of helping increase performance, Ponsse used three types of high-strength steel from SSAB for the newest generation of the Scorpion harvester—Strenx 700 MC Plus high-strength steel for the crane arms, Strenx 700 in the chassis and Hardox 450 in the cutter head. While all three steel types are designed to provide increased durability, they are also known for being lighter in weight. According to SSAB, its Strenx product can help designers decrease weight by as much as 20-40% or more.

Through the use of these steels, Ponsse was able to reduce the overall weight of the Scorpion harvester. This helps increase maneuverability of the machine, particularly in rough terrain, as well as reduces fuel consumption. In addition, the lighter weight of the crane arm allows it to move faster for increased productivity.

In November 2015, the company was awarded the international Swedish Steel Prize 2015 for its use of high-strength steel in the Scorpion harvester. “Ponsse has not only significantly improved operator ergonomics, but also enhanced functionality and safety, and increased productivity with this new design,” said Gregoire Parenty, chairman of the Swedish Steel Prize jury and Executive Vice President and Head of Market Development SSAB, in a release announcing Ponsse had won the award.

Comfort and visibility are key

The design of the harvester’s crane was an integral part of the ergonomic improvements made to the machine. Besides the use of high-strength steel to reduce its weight, Ponsse took great care in ensuring placement of the crane on the machine would not interfere with operator visibility. The harvester features a symmetrical crane boom design in which the crane is mounted on a separate base near the rear corners of the operator cab, and extends up and over the cab to allow for the best possible visibility on all sides of the harvester.

Meanwhile, the rotating operator cab was placed in the center of the machine to provide not only maximum visibility in all directions but also prevent operators from feeling any adverse effects due to the rotation of the cab.

Further assurance of operator comfort comes from the Scorpion harvester’s frame and active stabilization system. The three-part frame is connected by rotating joints which enable the front and rear frames to swing +/-12.5 degrees based on the type of terrain the machine is traveling over. According to the company, this lowers the axis point of leveling to reduce the amount of sway an operator might otherwise feel.

The active stabilization system uses sensors to monitor the direction, position and lift pressure of the harvester’s crane. Pressure is fed into a stabilization cylinder located between the middle and rear frames based on information received from the sensors which causes the frame and tires to be pressed in the direction of the crane. This system works whether the harvester is moving or stationary.

The use of eight wheels on the harvester aids stability, as well, by putting more contact surface on the ground. This also helps improve traction and flotation.

Ponsse has been making productivity- and ergonomic-focused enhancements to its entire machine lineup since 2014 which started with the Scorpion Harvester. The Model Series 2015 updates, as the company refers to them, include a transition to Stage IV engine technology and a double-circuit hydraulic system which increase service intervals and efficiency. Each new machine model also features an upgraded transmission designed for improved maneuverability over obstacles and on steep slopes.

“Appropriate design is pivotal to the operability of the machine. Operator ergonomics and ease of use are emphasized in demanding harvesting [applications], where a very technical machine is used to make quick decisions with a significant impact on the productivity of work. In Scorpion, easy daily maintenance and safe operation have also extensively guided the design choices,” said Juha Inberg, Technology and R＆D Director of Ponsse Plc, in a press release announcing the Scorpion harvester being awarded the Red Dot: Best of the Best 2015 award.

“When it comes to forest machines, quality and reliability are the keys to success, not only in terms of productivity, but also considering the safety of users. We do not take any chances with them,” he concluded.

Read more about the technologies and systems included in the initial Scorpion forest harvester release in the article “Visibility and Comfort Improvements Bring Productivity to the Forest.”

The Swedish Steel Prize was established by Swedish steel manufacturer SSAB in 1999. SSAB’s goal in creating the awards was to inspire and disseminate knowledge about high-strength steel and how it can be used to develop stronger, lighter and more sustainable products.

Each year, applications are accepted from companies, institutions, organizations and individuals who have developed, or are in the process of designing, a new product which uses high-strength structural steel, wear plate or tool steel. The steel used should contribute to the innovativeness of the design and provide clear benefits to the end user of the product.

Four finalists are chosen by the prize’s jury, which then selects a single winner. The prize is typically awarded in late November during a gala dinner that is part of a larger Swedish Steel Prize three-day event that also includes informative presentations about high-strength steels and sessions with world-renowned speakers. Attendees from all over the world take part in the annual event.

Visibility and comfort improvements bring productivity to the forest