Visibility and comfort improvements bring productivity to the forest

A desire to increase operator productivity through comfort and visibility enhancements leads one forestry OEM to design a unique, eight-wheeled harvester. 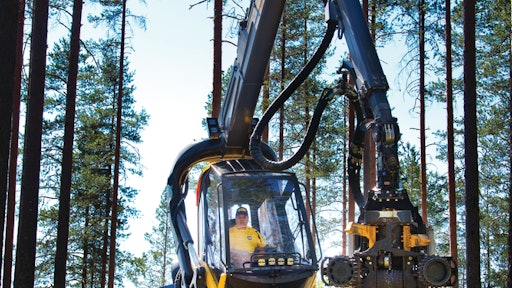 Ponsse chose to have the Scorpion harvester's crane extend up and over the operator cab for improved visibility on all sides of the machine.

In early 2013, Ponsse Plc (company information, 10960628), Vierema, Finland, introduced its new PONSSE Scorpion harvester (learn more, 10960634), a cut-to-length forestry machine designed to offer improved operator comfort and visibility. According to Antti Räsänen, Marketing Manager of Product Lines at Ponsse, the company's goal in designing the harvester was to design a truly unique machine that would meet customers' needs for productivity and efficiency, as well as comfort and visibility.

One of the methods Ponsse chose to help achieve its design goals was to incorporate the new PONSSE C50 crane featuring a two-arm lifting boom. As a hydraulic parallel crane, the PONSSE C50 uses a multi-chambered extension boom hydraulic cylinder to synchronize the lifting and extension booms instead of heavy and service-intensive steel beams. "This patented solution is lighter in weight and needs much less maintenance," says Räsänen. "It's also significantly more efficient regarding fuel economy."

Mounted on a separate crane base near the rear corners of the operator cab, the crane extends up and over the cab to allow the best possible visibility on all sides of the machine. "Visibility is one of the most important features in a harvester," says Räsänen. "We went through many different optional setups and the best one was to bring the crane over the operator." Positioning the crane in this manner prevents the operator's view from being blocked by the crane in front of the harvester or to the sides.

The operator cab itself is composed of large window panes with thin pillars between each pane to allow for maximum visibility. A rooftop window was included as well, enabling operators to see not only behind, in front and to the sides of the harvester but also above it to the treetops.

Rotation of the harvester's cab enables operators to position themselves at the best possible vantage point to keep an eye on the crane and the entire job site. To eliminate any possible discomfort from working all day in a rotating cab, Ponsse placed the operator chair in the middle of the cab's turning circle. This minimizes feelings of being swung around on a carousel, says Räsänen, and instead allows operators to simply rotate around their vertical axis for a more comfortable and productive workday.

Because the Scorpion harvester is intended to work in some of the harshest applications, ensuring operator comfort was of the utmost importance to Ponsse. To help guarantee comfort, the harvester has a three-part frame connected by rotating joints which allow the front and rear frames to swing ±12.5 degrees according to the type of terrain the harvester is traveling over. Meanwhile, the middle frame—consisting of the cab and crane—is hydraulically kept level. Räsänen says this provides a lower axis point of leveling, placing the axis point at the center line of the frames instead of directly underneath the operator cab. Lowering the axis point reduces the amount of swaying an operator might feel when traveling on uneven terrain. "As well as being more comfortable for the operator, this also keeps the balance point of the crane very close to the center line of the machine, improving stability," he says.

An active stabilization system on the harvester uses various sensors to monitor the crane's direction, position and lift pressure. Based on the information received from the sensors, the system will feed pressure into a stabilization cylinder located between the middle and rear frames, causing the rear frame and tires to be pressed towards the crane's direction. "It uses the mass of the rear frame as well as presses the rear wheels down to maximize stability," explains Räsänen.

The stabilization system works not only when the harvester is stationary, but also when driving, allowing operation of the crane on either side of the vehicle while it's in motion. If there is not enough stabilization force to keep the harvester upright, the stabilization system will stop the machine to ensure the operator's safety. Räsänen notes that customers using the machine have found the system to be reliable, enabling them to forget about the harvester's stability and instead focus on their work so they can be more productive, as well as comfortable, throughout the workday.

Further stability is provided by the eight wheels on the Scorpion harvester. The company first introduced its eight-wheel design concept when it released its PONSSE Fox and PONSSE Ergo harvesters in 2009. Räsänen says using eight wheels improves traction and flotation, as well as stability. "More contact surface to the ground naturally gives better traction and lower surface pressure," explains Räsänen. "[The] added weight of the wheels is located ideally low and wide to improve stability."

According to Ponsse, the eight wheel design also offers environmental benefits. Due to there being a larger contact are towards the ground, the surface pressure is lower in comparison to a machine with six wheels, making it better suited for working conditions with poor load-bearing capacity. For example, the six-wheel PONSSE Ergo has a surface pressure of 850 g/cm2 while the eight-wheel PONSSE Ergo is 280 g/cm2, which is similar to that of a human footprint (260 g/cm2). The lower surface pressure minimizes track marks in the soil, and thus disruption of the natural environment, as well as reduces fuel consumption due to the harvester being able to more easily maneuver over the terrain.

Also included on the harvester is the PONSSE Opti4G, a Windows- and PC-based forest machine information system first developed by Ponsse in 1993. As the management system for the harvester, Opti4G is the operator’s interface for making adjustments to the base machine, crane, harvester head and various machine controls. Opti4G handles all operations for cutting trees from data transfer to marking for bucking and reporting.  Additional capabilities include utilization of GPS positioning and satellite phone or mobile network connectivity.

The system can also provide information such as tracking of operator working hours and output, machine operation and fuel consumption. And because it’s a Windows- and PC-based system, operators are familiar with its functionality. “The beauty of the system is that even though it has a lot of advanced features, it’s still very simple to use and needs minimal attention from the operator,” says Räsänen.