ContiTech's lightweight components are made of glass-fiber-reinforced polyamide and 40% lighter than their steel counterparts. 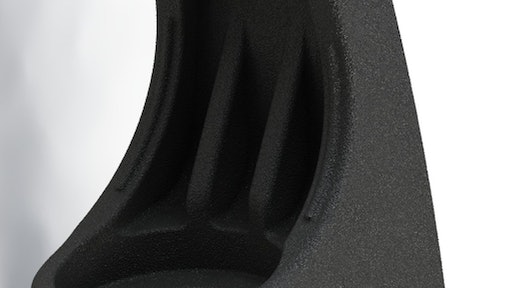 Lighter vehicles: with its lightweight components made from glass-fiber-reinforced polyamide, ContiTech is now conquering the off-highway sector as well. At MINExpo 2016 in Las Vegas, NV, U.S.A., ContiTech presented lightweight prototypes for construction vehicles and machinery for the first time. “We are one of the experts when it comes to lightweight components in the automotive industry,” says Vincent Sambo, Key Account Manager for ContiTech Vibration Control in North America. “We are now deploying the expertise that we have accumulated over decades of development work with leading manufacturers in order to expand the lightweight trend to include off-highway vehicles as well.”

Potential studies have shown that ContiTech can develop a much lighter alternative to steel components using glass-fiber-reinforced polyamide, both for construction vehicles and agricultural machinery. As an example, the specialist in lightweight construction has already developed a prototype bracket for a tractor engine mount. It is 40% lighter than the original steel component. “That is an enormous saving in terms of weight, which we have been able to achieve despite the significant loads exerted on the component,” comments Dr. Stefan Narberhaus, head of industrial development at ContiTech Vibration Control. Together with leading machinery manufacturers, ContiTech now aims to put the results of its research to good use and work on initial series production development.

A pioneer in lightweight technology

Since 2006, ContiTech has manufactured lightweight components made from glass-fiber-reinforced polyamide for the automotive industry. Products include heavy-duty engine mounts, which ContiTech produces in high volumes. The components are distinguished not only by their high strength, but also by their ability to minimize vibrations and noise (NVH). They also exhibit impressive crash safety. ContiTech has already won numerous international awards for its expertise in this field. Among others, software manufacturer Altair Engineering presented ContiTech with its Enlighten Award 2016.

In 2009, ContiTech also launched a lightweight transmission crossbeam – designed to support the forces and torques from the engine transmission unit – made from this lightweight material. It weighs 50% less than an aluminum component. In 2014, ContiTech unveiled the first rear-axle transmission crossbeam to be made from this high-performance polyamide. In 2015, this was followed by a support bearing for the spring strut. This is the first bearing made from this material to be designed for use in the chassis and front and rear axles of passenger cars. ContiTech has already supplied millions of torque rod supports and torque reaction mounts made from polyamide.