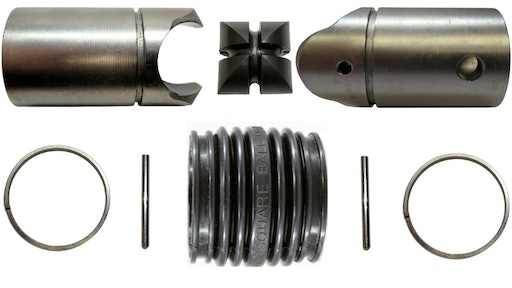 CCTY Bearing has taken a new approach to universal joints which uses a square ball and seven other components, creating the Square Ball Universal Joint.

As development of autonomous on- and off-highway equipment continues, so will the need to ensure the security of the equipment.
October 1, 2020

The importance of controlling access to and monitoring equipment will continue to grow as machine automation and connectivity progresses.
October 1, 2020

Evolving markets and technologies will offer great potential for those able to capitalize on developing the right solutions.
October 1, 2020

The patented design eliminates interference with the burr created by the setscrew through use of axial grooves at setscrew locations that run the length of the inner ring.
Regal Beloit Corporation
September 17, 2020

Polygon collaborated with K-Tec Earthmovers to develop bushings featuring liners that eliminate the need for greasing or other regular maintenance.
Polygon Company
September 17, 2020

Trelleborg uses artificial intelligence to analyze sensor data that is captured around the seals and create a maintenance plan that will help prevent costly downtime.
July 22, 2020