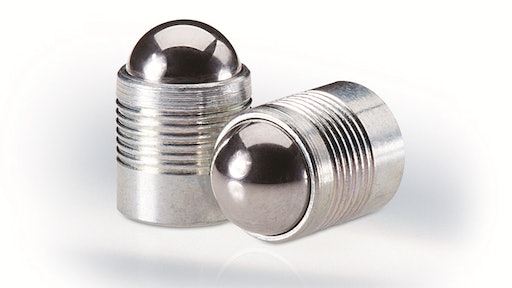 Preliminary evaluations of the new design, which had originally sealed holes with ball plugs, showed debris was created during the press-in installation processes, as well as a high rate of seal failures. The designer identified the need for a superior, engineered solution to seal multiple critical ports within the central manifold and contacted SFC KOENIG, which worked with the customer to create a reliable seal that would prevent pressure loss and eliminate fluid leakage.

“Seal performance was critical to the successful operation of this new system, and selection was made more complex due to the anodized aluminum manifold base material,” says Nate Moore, Product Manager at SFC KOENIG. “Installation of the existing ball plug seals was resulting in cracks and leaks. Initially the customer increased the amount of sealant, which led to contamination, added assembly time, and increased costs. Our team worked with the customer’s engineering department to identify the best sealing components and installation equipment to provide reliability, safety and performance, while easily integrating into their high-speed production environment.”

SFC KOENIG assisted the customer in the selection of a MB 850-040E KOENIG EXPANDER plug based on size requirements, materials, pressures, installation processes and the overall safety-critical nature of the application. As opposed to ball plugs, that were simply force fit into the port, the KOENIG EXPANDER utilized an engineered expansion principle. When inserted, the plug’s serrated sleeve was expanded into the base material and formed a reliable, secure and leak-free seal that required no sealant or additional machining processes.

During seal selection, SFC KOENIG engineers gave special consideration to ensure the anodized aluminum base material would not wear or deteriorate after repeated thermal and pressure cycles. In addition, plugs needed to perform with vigorous 160 bar air leak testing. While this testing simulated unusually high-pressure situations and exceeded normal operating tolerances, it was critical that seal integrity was maintained both in high-pressure situations as well as after pressures returned to normal ranges. SFC KOENIG engineers successfully demonstrated the effective design of KOENIG EXPANDER components.

“Our team has extensive experience in automotive sealing applications,” continues Moore, “which allowed us to provide valuable support to the customer in the design process, and also to provide a solution that they could trust. The combination of our MB 850 and our installation equipment reduced the risk of contamination, streamlined seal installation, and in the long run has lowered their costs when warranty and rework expenses are considered.”

The customer’s initial testing of the MB 850 showed improved pressure performance capabilities and no pressure loss, even after anticipated lifetime cycle testing. Successful field testing of a low volume initial run showed continued reliability and success. SFC KOENIG now has begun to supply orders of more than 1 million MB series expander plugs to the automotive manufacturer, and is a trusted partner for the company’s many sealing and flow control needs.