Mitas loaded and shipped its 100th truckload of farm tires from its facility in Charles City, IA. 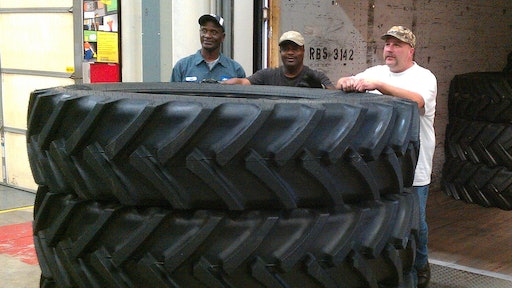 Tire maker Mitas loaded and expedited the 100th truck of farm tires made in Charles City. “This delivery is intended for American farmers,” says Pavel Charvat, the president of Mitas’ North American subsidiary. Some of Mitas’ tires are also exported abroad. Mitas’ Moscow sales office has confirmed that the first two containers of tires made in Iowa were delivered to customers in Russia.

“Mitas continues installing additional tire-building machines and curing presses,” Charvat says. “This week, Mitas has reached yet another milestone. It now employs 150 locals. By mid-2013, Mitas plans to have 237 full-time employees,” Charvat adds. By that time, the plant will have reached its full planned production capacity of 13,500 metric tons of tires a year. Mitas is the third American radial farm-tire maker as of 2012.

“This has been a very busy summer for us in Charles City,” Charvat says. The company presented a contribution to the Community Foundation, the team volunteered at the Fourth of July parade, and Mitas hosted a street party in August. “Mitas is a responsible member of Charles City and Floyd County,” Charvat reiterates.