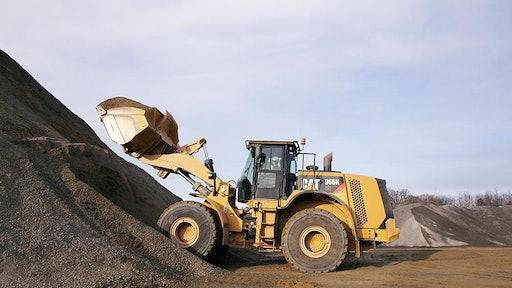 Equipped with an advanced powertrain system, the new Cat 966K XE wheel loader impressively delivers up to a 25% fuel efficiency improvement with optimum performance. The new model meets the needs for both efficiency and sustainability while simplifying the operator's interface and operating technique.

The 966K XE has been engineered to deliver superior efficiency by utilizing an integrated Cat continuously variable transmission system. A hydraulic pump and motor (variator unit), allows for a smooth and continuous gear ratio change between engine speed and machine speed. The variator provides this ratio flexibility while greatly reducing the heat load generated by the drivetrain when the machine is digging, pushing and climbing under heavy load. The continuously variable gear ratio of the variator also enables the engine to run at a more efficient operating range independent of machine ground speed.

With the 966K XE, transmission operation is automated and transparent to the operator. The machine is well balanced and easy to operate at extremely low engine speeds, providing optimal productivity and burning less fuel. While maintaining the ability to operate effectively in moderate applications, this machine delivers improved performance on grade and in aggressive applications. The operator has the ability to control maximum ground speed through the use of virtual gears to provide flexibility in various machine applications.

The engine can be controlled to operate more efficiently over a wide range of conditions. During deceleration, machine momentum can be recovered as free energy to power implements or the cooling fan, while significantly lower working engine speeds result in reduced soot build-up for longer regeneration intervals, cutting fuel use further.

The 966K XE has just two pedals with reduced operating interface/mode complexity. In addition,  the operator is free to concentrate on bucket fill and digging capabilities without the need for manual shifting. The operator can confidently utilize the machine while the integral power system control prevents engine over-speeding and makes it nearly impossible to stall the engine while digging.

When engaging the stockpile or quarry face the machine automatically reduces speed under full power, without the need for manual downshifting. Smooth and efficient directional changes reduce tire wear, without the need for operator input. In addition, releasing the pedals on a grade does not result in rollback, providing greater control for the operator.

As with the 966K, the 966K XE benefits from a comfortable and productive operator station and the left and right-hand sliding windows can be opened and closed while seated. A standard rear-view camera with large color monitor enhances visibility to the back of the machine.

A new low-effort electro-hydraulic joystick steering system is standard. Joystick steering permits operators to work in the most ergonomically neutral position with both arms resting comfortably on wide, well-padded, adjustable armrests. A high-backed seat with lumbar support further enhances ergonomics. The Cat joystick steering system has an exclusive force-feedback feature that automatically increases joystick effort as ground speed increases. This improves steering control and comfort, especially at higher speeds. The joystick moves side to side; its angle mirrors the machine’s articulation angle.

The engine runs at the most efficient speeds to reduce fuel consumption, which could lead to extended engine life. Furthermore, integrated retarding and modulated torque control could also result in increased tire and brake life.

The 966K XE will be available in North America in the first quarter of 2013.