Scania announces it will deliver chassis modules for a new fleet of 101 trolleybuses in Sao Paulo, Brazil. 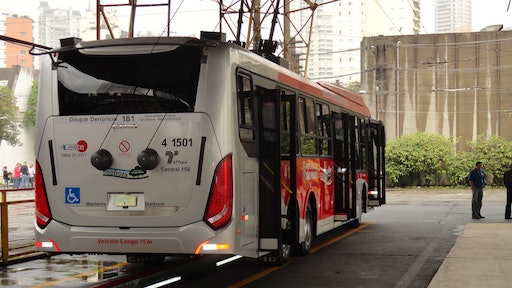 Scania will deliver chassis modules to a new fleet of 101 trolleybuses to be operated by Ambiental Trans on dedicated, electric bus lanes in the megacity of São Paulo in response to stricter regulations to combat climate change. The new 3-axle 15-meter trolleybus was showcased at the recent FetransRio public transport fair in Rio De Janeiro. Other operators are also in talks with Scania regarding trolleybuses.

“When placing this order, Ambiental Trans responded to the authorities’ continual quest for bus fleet renewals to reduce pollution,” says Wilson Pereira, responsible for Scania's bus sales in Brazil. “A prototype Scania trolleybus run­ning with another operator in São Paulo has shown that the concept works well in practice. We are continuing talks about an extended order with this operator.”

“When developing the trolleybus, we departed from the design of a 15-meter 3-axle low-entry bus with hydraulically steered tag axle behind the drive axle. This is an ideal combination for this type of city route, where street space is at a premium and good manoeuvrability is crucial.

“Passenger capacity is a full 96 instead of 80 for a conventional two-axle city bus, which in fact is close to that of an articulated 18-meter bus, but with much reduced technical complexity. Partnering with the authorities like this to rapidly increase urban mobility and reduce pollutants is most stimulating for all involved,” concludes Pereira.

The trolleybus is fitted with a high-output WEG electric motor that eliminates the need for a gearbox. The motor propels the bus via a propeller shaft to the drive axle. The stylish body is built by Caio and all the electrical integration is carried out by Electra, a company specializing in this type of service. A bank of backup batteries under the dome on the roof provides an operating range of 3 to 5 km in case of power failure or re-routing.

Public transport in the megacity of São Paulo is based on 17,000 buses. Interest in trolleybuses is increasing for environmental reasons and the current fleet of 400 is growing rapidly. The majority of bus lines are operated by concessionaires under the supervision of a municipal company responsible for planning and managing public transport. A uniform ticketing system simplifies line changes and speeds up passenger flow at bus stops and bus stations.

Bus systems with dedicated lanes are increasingly used as a powerful tool to achieve the flexibility in public transport required in a rapidly changing society like Brazil, where building rail systems would take far too long to solve the current gridlock in urban traffic. Trolleybus systems are more advantageous than rail systems when it comes to investments, being only two to three times more expensive than diesel bus systems, compared to rail systems, which are generally between five and 10 times more expensive.

Scania's experience of trolleybuses extends back to the 1980s in Brazil and to the post second world war 1940s in the Swedish capital of Stockholm, where a large number of Scania-Vabis-based trolleybuses were operating until the changeover to right-hand traffic in 1967, when all of the inner-city tram and trolleybus lines were replaced by diesel buses.